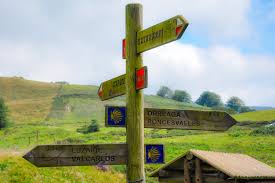 There are several roads that enter Galicia and go towards Santiago. The Original or Primitive Way is considered the oldest of all of them, since it was the route followed by King Alfonso the Second, during the ninth century to visit the tomb of the Apostle. The French Way, the most travelled by pilgrims today, was considered the gateway for the believers who came from France and other European countries. This road followed an old Roman road and was considered the safest route to get to Santiago. The Northern Way has gained popularity today, but in ancient times it was considered an itinerary with great orographic difficulties. The Camino Sanabrés began as a shortcut to shorten the Silver Way that came from Seville. The Portuguese Way was developed on the river and land routes left by the Romans and the Muslims. This path was consolidated when Elizabeth of Portugal, “The Saint Queen”, pilgrimaged to Santiago in the fourteenth century. It is believed to be as old as the French Way. Finally, the last road that enters Santiago is the English Way. It was the maritime route used since the middle of the twelfth century by pilgrims from Scandinavian countries, England, Ireland or Scotland, among others. They arrived in Galicia by sea at the ports of A Coruña or Ferrol and continued the journey on foot to Santiago.

Once we know the different routes that take us to Santiago, we will begin our adventure on the Primitive Way. Would you like to come with us?

Next article The mosaic of architectonical styles in Poznań