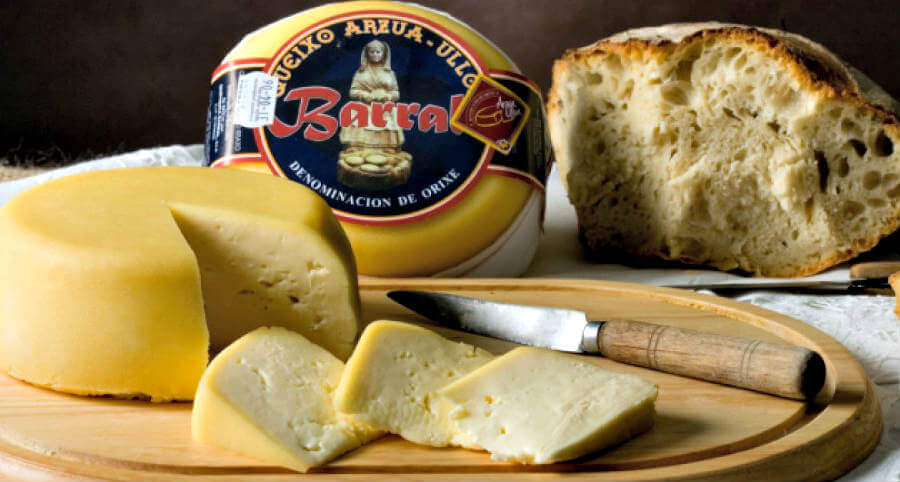 It is one of the most popular cheeses in our country. It has a Denomination of Origin and is manufactured in Galicia with fresh cow’s milk. Artisan, with a smooth and creamy flavor; a delicacy deeply rooted in the gastronomy of this region.

Arzúa-Ulloa cheese is made with high quality raw or pasteurized cow’s milk in the heart of Galicia, specifically in the Ulla River basin, which frames the provinces of A Coruña, Lugo and Pontevedra. This product, together with the cheese from “Tetilla” (, Simón da Costa and O Cebreiro, is part of the quartet with a protected Denomination of Origin that exists in the region. And it is that the cheese is part of the gastronomic culinary identity of the Galicians; so much so that, every year, between the months of February-March, the “Festa do Queixo” is held in Arzúa (south of A Coruña), a meeting in which this product becomes the main protagonist. The event, declared a Festival of Tourist Interest in Galicia, boasts a program loaded with contests, cheese-making workshops, music festivals, and many other activities.

The production of this cheese, protected under the Arzúa-Ulloa Designation of Origin, covers a total of 32 municipalities that produce three different types, mainly due to the maturation time and the type of cattle from which the raw material is extracted.

Coagulation is carried out at a temperature of 30 to 35 ° C with animal rennet for a period of 30 to 70 minutes (the time varies according to the conditions of the milk and the rennet). The cut is made so that the granulometry of the curd is approximately 5-10 mm in diameter. Subsequently, it is washed with drinking water to lower the acidity of the curd, so that the pH of the processed product is not lower than values ​​between 5.0 and 5.5.

Subsequently, we proceed to the molding that will give it the cylindrical shape. The duration of this process depends on the pressure applied and the size of the pieces. After this process, the cheese would be ready to be placed in a vat on top of the curd or, in brine, for less than 24 hours. Finally, the product is subjected to maturation, which is carried out in spaces with a humidity between 75 and 90 percent, and a temperature below 15 ° C. The minimum maturation period depends on its variety: In the case of cured ones, the minimum period will be six months. During the maturation time, the cheeses will be subjected to the necessary turning and cleaning practices so that they acquire their peculiar characteristics.

Once the cheese has completed all the production phases, it is labeled.

Its use in the kitchen:

Cheese is one of the essential kings of our cuisine and Arzúa-Ulloa cheese, although it has traditionally been associated with a table-top product, is increasingly taking center stage in the preparation of all kinds of sweet and savory recipes. Promoting the consumption and use of this cheese is one of the fundamental objectives pursued in different gastronomic events such as the Queixo de Arzúa Fair where many chefs come together to highlight its versatility through show cooking.

Miguel Liboreiro, chef at the O Tobo do Lobo restaurant, is one of those who launches into making sweet proposals with this cheese. In his recipe book he highlights the pastry filled with cream, nougat and red fruits; and creamy Arzúa-Ulloa cheese, quince gel and walnuts.

Next article The extraordinary creative sphere of Mattia Preti, the “Cavaliere Calabrese”