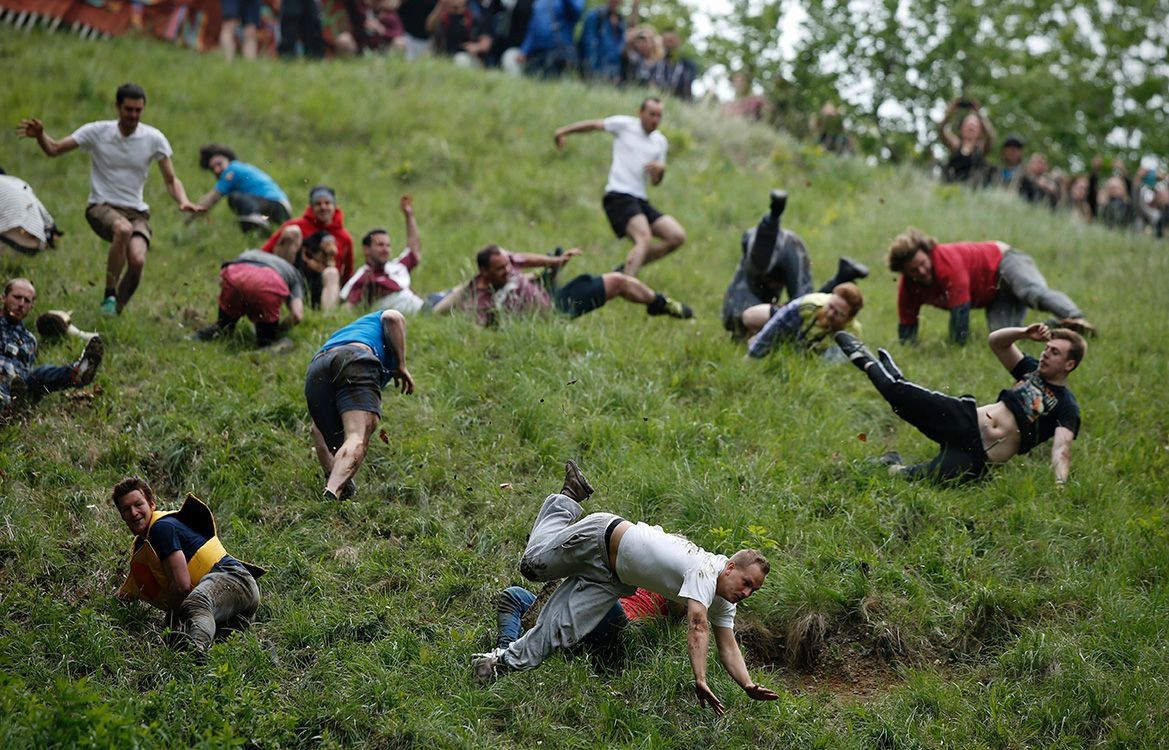 The cheese rolling festival is a contest held in Gloucester, England. It has been around for over 600 years and is usually held on the Spring Bank Holiday at Cooper’s Hill in Gloucester.
The festival is quite dear to the locals of Brockworth — a parish Village located at the South East of Central Gloucester. And over the years, it has successfully caught the attention of more people from other parts of the world — with interested participants coming in from countries like Nepal, New Zealand, Australia, and Canada.

What is the Cheese Rolling Festival ?

Originally the festival was done with bundles of burning Brushwood. This was a representation of the birth of a new year. During the festival, There’s usually biscuits and sweets scattered at the top of the hill by the master of the ceremony.

This extreme escapade has been going for more than two centuries and attracts participants and audiences from across the world.

Daredevil cheese chasers hurl themselves down the notoriously steep – 1:2 gradient – Cooper’s Hill in Gloucestershire as they try to catch a wheel of Double Gloucester cheese.

The Cheese Rolling event basically involves a bunch of people both male and female running towards a cheese rolling 200 yards down Cooper’s Hill.
From the photograph above, you can imagine how dangerous it is especially as the surface of the hill is uneven. As the participants chase down the rolling cheese, they tumble/summersault, acquiring several injuries, yet, they don’t seem to mind as the game continues until someone gets hold of the cheese.

From the top of the hill, a 3–4 kilograms round of Double Gloucester cheese is sent rolling down the hill, which is a length of 200 yards. Competitors then start racing down the hill after the cheese. The first person over the finish line at the bottom of the hill wins the cheese. The competitors are aiming to catch the cheese; however, it has around a one-second head start and can reach speeds up to 110 kilometres per hour, enough to knock over and injure a spectator. In the 2013 competition, a foam replica replaced the cheese for reasons of safety. The winner was given the prize of an actual cheese after the competition.

The Cheese Rollers pub in the nearby village of Shurdington, about 5 kilometres from Cooper’s Hill, takes its name from the event.

So far, there hasn’t been any formal record of deaths though there have been several severe injuries that prove the event to be quite as dangerous as it looks but preventive methods have been employed as there are usually first aid services on the ground in cases of casualties. Also, there are several volunteer ‘catchers’ from the local Rugby club and ‘young farmers’ whose duty is to stand by to catch any participant that loses balance to prevent unfortunate Falls.

For many years, the festival was practiced by the locals of Gloucester and other foreigners but in 2009, the festival was canceled as more people began to sustained severe injury from participating in the event. In the following year, in order to keep the Grazing rights, the locals of Gloucester decided to team up with a group of journalists and organize a small version of the cheese rolling Festival. By 2011 the festival was Revived without any form of official management. There were even campaigns like the “save the cheese roll” movement — with about 500 supporters.

Next article A walk through the narrowest street of Italy – in Santa Caterina, Southern Italy