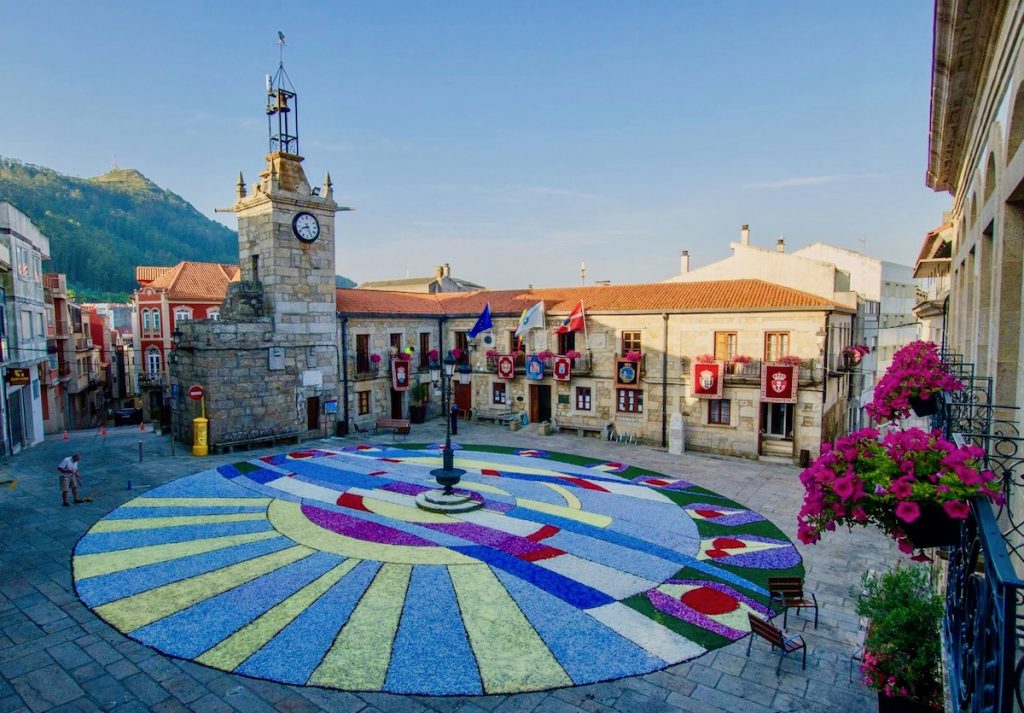 The origin of the Corpus Christi festival is found in the vision of Blessed Juliana of Liege (1246). In its beginnings it was simply a local festival until Urban IV extended it to the entire Catholic world in 1264 and fixed its celebration on the Thursday following the eighth of Pentecost. From 1316 with John XXII, the Eucharistic exaltation was carried out by means of a solemn, public and general procession of the common people, guilds, nobility, clergy and magistrates in all the parishes, towns and cities. With the passage of time, the processions became paratheatrical shows with dances, hors d’oeuvres, cars adorned with figures and actors, urban decorations such as castles, arches and floral decorations, giants, big heads, demons and various masks and the inevitable Tarasca (in Galicia Coca).

In the Peninsula, it seems that Alfonso X took part in a Corpus Christi celebration in Toledo around 1280 and we know that it was celebrated in Seville in 1282 but it is not probable that urban processions were held at this time. With regard to the spectacular apparatus of the city processions, its antecedents must be found in the court festivals and in the Royal Entrances, not in the previous religious processions, most of them rather gloomy and not festive such as Corpus Christi, the spring festival. , of triumph and resurrection. Similar is the case of the Entremeses that were frequently represented in the same procession, their origin is also found in the Momos and in the courtly mimic or dialogued representations. The Savages that usually appear in processions also come from the court festivals and in the same area Tarascas and similar monsters are documented before their appearance in the Corpus.

Focusing on the Galician case, the celebration of spectacular Corpus Christi processions has been proven for sure only since the first third of the 15th century. Although some legends and popular romances date back to the fourteenth century, for example the one that maintains that the Archbishop of Compostela D. Suero Gómez de Toledo was assassinated in Santiago when he carried the Sacrament in the procession, or that of Xán de Arzúa in Allariz (1317 ), its veracity is, as we will see below, quite doubtful.

In the case of Compostela, a popular song of undetermined date presents the murdered archbishop in front of the house of the Balconada during the procession, but all historical sources agree that the murder of Don Suero took place on June 29, 1366, when the Corpus of that year fell on the 4th, and the Casa de la Balconada did not exist as such in the 14th century.

In the town of Allariz, popular tradition speaks of the celebration of the Corpus Christi procession since 1316, the year of its institution by Juan XXII, which would have given rise to mockery from the Jewish community, causing Xán to leave the city the following year. Arzúa, who, mounted on a yellowish bull, dispersed the Jews by throwing them flour mixed with rabid ants (this legend is at the origin of the Festa do Boi that has survived in Allariz to the present day).

Several authors also allude to the founding at this time of a Cofradía do Corpo de Deus, based in the Parish of Santiago, which if true would make Allariz the first town in Galicia, and one of the first in Spain, in having celebrated a Corpus Christi procession.

The existence of an ancient Eucharistic cult of which the permanent exhibition of the Blessed Sacrament in the Cathedral of Lugo or the legend of the Cáliz do Cebreiro would be vestiges have also been adduced as signs of the antiquity of the Corpus Christi festival in Galicia. Both cases are nevertheless of uncertain date that does not seem previous to century XIV. In fact, the Lugo cathedral has the rare privilege of permanently exhibiting the consecrated Host, and in the city since 1669 the Offering of the Kingdom of Galicia has been celebrated on the Corpus Christi day in whose constitution memorial it is stated that “there are more than one thousand and ninety years that in the altar of its Main Chapel this Most Noble King enjoys the true and real presence of Our Sacramented Redeemer ”, which would lead to the sixth century as the date of establishment of the privilege that tradition justifies in the fact that Lugo was the only seat episcopal church that was not occupied by the Arabs.

Regarding the legend of the Cáliz do Cebreiro, in which tradition supposes that the miracle of transubstantiation would have been verified, although it is related to a piece of goldsmithing from the end of the 12th century, it seems that it does not predate the 14th century and only We have documentation on it since the 15th century, so it does not serve to prove the antiquity of the Eucharistic cult in Galicia, although it does serve as a testimony of its roots in Galician lands, exemplified also by the popular etymology that derives the name of Galicia from the word “Chalice”, and by the presence of the chalice and the host in the coat of arms of the Kingdom of Galicia and in those of Mondoñedo, Viveiro and Lugo, the latter city that makes a profession of faith in the legend of its coat of arms, reproducing the one of the Kingdom of Galicia in the 17th century: HOC HIC MYSTERIUM FIDEI FIRMITER PROFITEMUR.

However, it seems that the diffusion of the festival throughout the Galician geography did not occur until the 16th century, a century in which, following the guidelines of the Counter-Reformation, the Brotherhoods of the Holy One were instituted by the Archbishop of Compostela Gaspar de Zúñiga y Avellaneda (1559), which quickly spread throughout Galicia.

The floral carpets during Corpus Christi

The Corpus Christi festival is coming, and many Galician towns will decorate their streets with floral carpets to honor the Blessed Sacrament. In some of them, the tradition is so ingrained and the rugs are so spectacular that, beyond its religious motivation, the Corpus has the status of a festival of tourist interest.

Ponteareas (Pontevedra) is the best known Galician ambassador of this art that disappears under the feet of the faithful who accompany the procession of the Blessed Sacrament, and her Corpus Christi Festival has been declared of International Tourist Interest. The other two with recognition of festivals of tourist interest, although of Galician scope, are the Corpus Festival of Redondela (Pontevedra), which coincides with its Coca Festival, and the Florais de Ares Corpus and Carpet Festival (A Coruña)

The admiration that rugs arouse makes up for the enormous amount of work they require and the short time they look impeccable. A month before the celebration, the neighbors begin the painstaking process of collecting plants and stripping flowers. In the groups, the elderly women stand out, who as authentic captains direct the work and transmit the secrets of the art of making floral rugs. Myrtle, yours and mimosa are some of the plants most used to mark the contours and enhance the backgrounds of the designs, while the showy petals of a wide variety of flowers (roses, carnations, tulips, hydrangeas …) are used for the central motif of the carpet.

The culminating moment is the layout and ornamentation of the rugs on the floor, which occupy the entire width of the street and usually have a minimum dimension of 10 meters. It takes place the night before the day of the procession, when the streets are closed to traffic. Only then does the creativity of the carpenters unfold, and designs appear with or without religious motifs, figurative or abstract; uniquely floral compositions and compositions that combine sand and other plant elements.

The result is a colorful tapestry with the hours counted – and therein lies its charm – that before and during the procession focuses the interest and curiosity of neighbors and visitors.

Next article The art of Mimmo Rotella, calabrian artist destroyer of posters