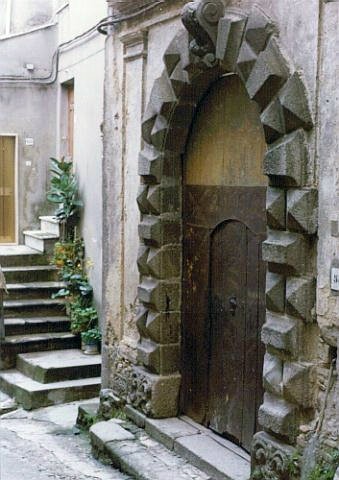 On the hills of the Ionian coast of Calabria, not far from the sea, lies the small village of Davoli Superiore, an open-air museum with a great historical and cultural heritage.

Situated in the province of Catanzaro, the capital of Calabria region, Davoli is divided in two fractions (Marina, along the seaside, and Superiore) and has a total of about 5500 inhabitants. The ancient name is “Daulius” and comes from Daulia, the city of Focile from where the founders came from. According to recent studies, taking into account the conformity of the places to the Homeric description, this territory was the kingdom of the Phaeacians, the population who welcomed Ulysses after the shipwreck.

The Portals of Davoli represent the best and the most artistic and cultural heritage of the small village. Currently, 29 portals have been counted in the Historic Center and most of them date back to the XVII-XIX century. They were built in the 3 main districts (Santa Caterina, Santa Barbara and San Pietro) and the shown architectural richness is typical of an elevated social class.

The semicircle of the round arch is always interrupted by the keystone which is the central element of the arch, placed so high and in the middle of the portal with a suitable surface for coats of arms, writings and decorations. All the portals rest on thresholds, also made of squared granite blocks and the arches are made of two single stone ashlars.

Some of the keystones are decorated with apotropaic masks (commonly called in Davoli “babbe e portune”), useful, according to popular traditions, to ward off or destroy any evil influences from people or external events. The masks depict deformed or angry human faces, carved in the act of driving away or offending. But, the most important symbolic value of the keystones was to embellish, enhance and catch the eye, showing the belonging to an upper social class.

Similar portals, with the same style and decorations, are present in Serra San Bruno, a mountain village near Davoli, where lived the so-called “stonebreakers” who broke large blocks of stone to reduce them into smaller blocks to be shaped by sculptors. 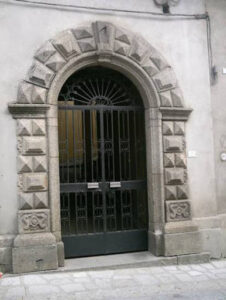