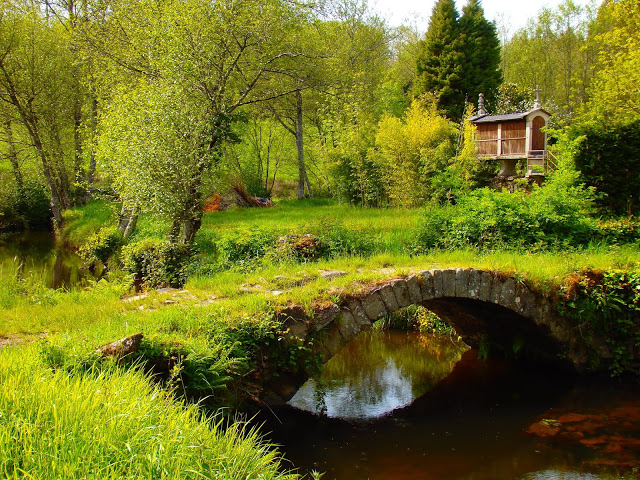 From Ferreira to A Castañeda

We embark on the fourth stage of the Primitive Way to Santiago and leave Ferreira, not without first passing through the Roman bridge with a single arch that allows us to cross the river in an idyllic setting.

We left Ferreira behind and headed towards Leboreira, Augas Santas and Merlán, already entering the province of A Coruña. In the Augas Santas parish, after having crossed meadows and cattle farms, near the church of San Xurxo, we come across a set of stone fountain, tables and benches, presided over by an image of the Apostle Santiago. Pilgrims take advantage of this wonder of the Camino to leave their offerings at the foot of the statue of the Apostle. An idyllic place to rest, lulled by the sound of falling water, while we enjoy the cool and humid riverbank, relaxing under the leaves of the trees. This image of the Apostle in this idyllic setting indicates pilgrims that Santiago de Compostela is getting closer and closer.

After having conquered the Careón Mountain Range and leaving the villages of Vilouriz and Vilamor behind, we arrive at the village of Melide, which is the point of convergence of two of the most important Jacobean Ways: The French Way and the Primitive Way. Its convergence place is the Convento Square, in the centre of the village, where the old pilgrims’ hospital is located, today dedicated to a museum. In the centre of Melide we also find the Sancti Spiritus church that belonged to the old convent of the Third Order of San Francisco from the fourteenth century, an example of continuity in space and time. Both the church and the missing convent were built with the stone of the castle demolished in the Irmandiña Revolts.

After discovering the different corners of Melide, visiting the Romanesque temple of Santa María de Melide and seeing the oldest Gothic cross in Galicia, which is located next to the San Roque chapel, we headed towards A Castañeda, where the lime kilns that were used in the construction of the Santiago cathedral were located, and that will be our final destination of this fourth stage of the Primitive Way.

Next article Diving in the history of a memorable beach resort in Badolato, Southern Italy