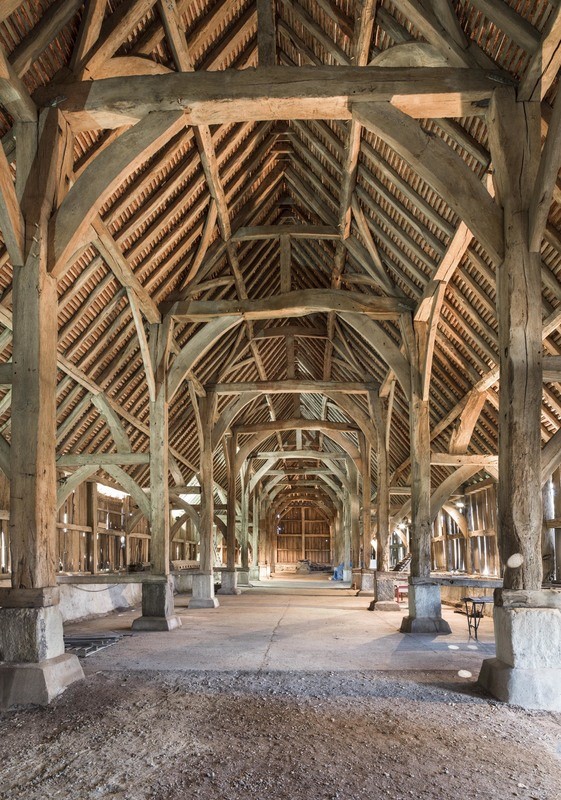 Food has been the cornerstone of human development from time immemorial. Indeed, there is a reason the Agricultural Revolution of the 18th century is credited as a precursor to the Industrial Revolution that kickstarted Britain as the preeminent global power of the 19th. It is on this basis that the significance of barns like Harmondsworth is derived.

Built in the early 15th century (around the 1427), the barn would have integrated the latest construction techniques which served to develop concurrent construction of local cathedrals. Relatively monolithic from the outside, the interior presents an impressive wooden network of trusses, beams, and columns that lend it a cathedralic character, though its numinosity might arise from the link it provides to our working brethren of the past moreso than any extant ecclesiastical quality. Perhaps Harmondsworth’s aspect of most import, however, is that of its all-timber construction. Few barns like it survive due to the propensity of wood to disintegrate with time; it is testament to its firm fabrication that Harmondsworth stands proud to this day.

The Great Barn is rather unusual in various fashions: extensive documentation throughout its lifetime allows us to create an informed historical narrative as to its use (and thus, the use of contemporary barns across the country); the purpose of the barn being that of wealth-generation, as opposed to more commonly surviving buildings being that of expenditure, provides a unique vision of the working lives of past’s peasantry; and the surviving timbers which allow corroboration of documents by means of ‘dendrochronological analysis’ – the measure of timbers’ age as indicated by tree rings.

Just as the barn’s construction and design was influenced by that of impressive structures of temporal locality (like cathedrals), it has served as the inspiration for several buildings since, especially in the late 19th and early 20th centuries. Architects such as George Gilbert Scott and Basil Champney, respectively responsible for designing ChristChurch Cathedral, New Zealand, and Mansfield College’s library, Oxford, directly attributed the buildings’ bases to Harmondsworth Barn. It is somewhat disparaging, therefore, to find little publicly-available information analysing the barn with regard to any of its distinctive features, a matter being rectified to some extent at the moment. Open to visitors from April to October, it is certainly worthy of your consideration.

Next article 11 of November. In Calabria in San Martino every grape must become wine!