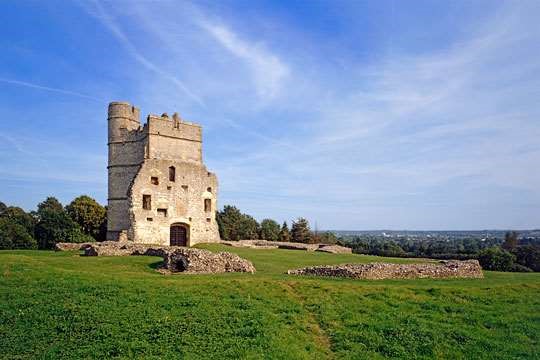 Donnington Castle overlooks the Lambourn Valley in an important strategic position commanding the crossing of major north–south and east–west routes.

The manor of Donnington was held by the Abberbury family from 1287, and in 1386 Sir Richard Abberbury was granted a licence ‘to crenellate and fortify a castle at Donyngton, Berks’ by Richard II. Sir Richard had been a companion of Richard II’s father, Edward the Black Prince, at the battles of Crécy and Poitiers.

The castle consisted originally of a curtain wall with four round corner towers, two square wall towers and a substantial gatehouse, constructed around a courtyard in the style typical of the fortified residences of the period.

In the early 15th century the castle was held by Thomas Chaucer, son of the poet Geoffrey Chaucer, and later passed into the ownership of the Crown. Henry VIII is reported to have stayed here in 1539 and Elizabeth I in 1568.

During the Civil War Charles I set up his headquarters in Oxford and in 1643 dispatched Sir John Boys, with 200 foot soldiers, 25 cavalry and sufficient cannon to resist a siege, to take possession of Donnington from the Parliamentarian John Packer.

Having taken the castle, Boys built defences around the lower slopes of the hill in the shape of a star, the projections providing sites for gun emplacements that gave a good field of fire.

Between 1644 and 1646 the castle was attacked many times, twice being relieved by the king in person. Only when the Royalist cause appeared hopeless did Boys surrender to the Parliamentarian troops, after first obtaining the king’s permission to do so.

Parliament voted to demolish the badly damaged castle in 1646 and only the gatehouse was left standing. This was restored to John Packer.

The building passed to the guardianship of the state in 1946.

Previous articleSTANISŁAW BARAŃCZAK – THE CENSORED POET FROM POZNAŃ, WHOSE POEMS YOU CAN FIND ON CITY MURALS TODAY