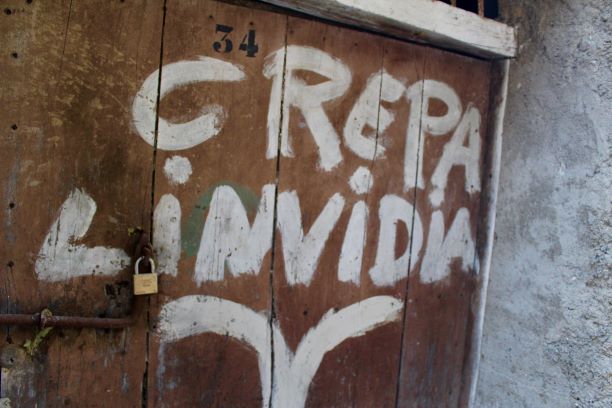 “Crepa l’invidia” means “Should die your envy” and by walking around in Badolato, you will find this writing at some catojo (dialect word for cellar) door or wall.

The reason behind this writing? As protection from the evil eye. Local farmers thought it was important to protect what they kept in their cellar from people envy. The catojo used to be the most important place of their house, since it was the place where they used to store their crop, wine, meat,… Even drawings of goat horns or real one can be found next to the door of a typical catojo in Badolato!

The evil eye is a superstitious curse or legend, believed to be cast by a malevolent glare, usually given to a person when one is unaware. Many cultures believe that receiving the evil eye will cause misfortune or injury.

Superstitions produce a sense of having control over outer conditions and reduce anxiety and are prevalent in conditions of absence of confidence, insecurity, fear, and threat.

The idea expressed by the evil eye causes many different cultures to pursue protective measures against it.

The idea of protection from the evil eye dates back at least to Greek classical antiquity, 6th century BCE where it appeared on Chalcidian drinking vessels, known as eye cups.

“Superstition is real, with around 40% of the world’s population believing in the evil eye”

If writing “Crepa l’invidia” at your house door is too flashy, I would suggest you to wear a more discreet red horn-shaped pendant!

Next article The legend of Sir Bevis of Hampton