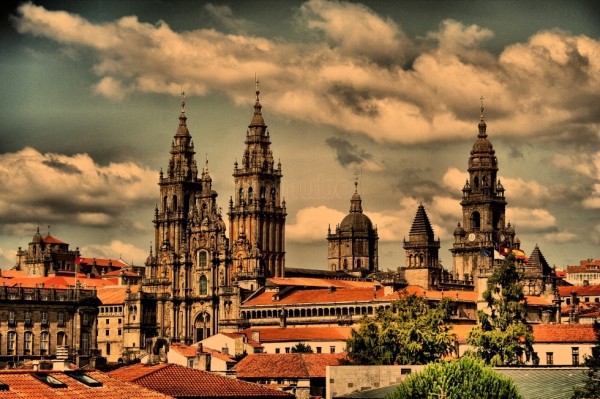 From O Empalme to Santiago

And finally the day came! Yesterday, July 25th, coinciding with the celebration of the day of the Apostle Saint James, which this year is also the Holy Year, we made our last stage of the Santiago Way to reach Santiago and embrace the Apostle.

We start our tour in O Empalme and head towards the village of Santa Irene, a place of great beauty and known for its hermitage and its fountain of healing powers. There, we find the Chapel of Santa Irene, from the late seventeenth century. The chapel is surrounded by an oak grove where the pilgrim rests under the quiet oaks. At the foot of the chapel we find a fountain, which, according to legend, emanated water with the power to make agricultural pests disappear. This fountain is also known as the “Fountain of Eternal Youth” because according to a popular belief, everyone who washes his face with the water that emanates from the fountain will always remain young.

We leave the village of Santa Irene to continue our way to Santiago. We continue towards Pedrouzo, capital of the Pino council, and you can already begin to appreciate the urban constructions typical of the city. When arriving at Lavacolla, the pilgrims traditionally took the opportunity to cool off in the stream found in that place. We ascend towards Monte do Gozo to be able to see, for the first time, the towers of the Cathedral of Santiago. After so many kilometres and overcoming certain difficulties on the Way, the emotions that pilgrims feel at this time are very intense. Sighting the Cathedral of Santiago from Monte do Gozo is a moment of full happiness, hence the name of the place “Gozo” which in Galician means happiness.

We started to descend from Monte do Gozo through the San Lázaro neighborhood and then through the old “Os Concheiros” neighborhood, where scallop shells were sold to walkers who had just arrived in Santiago. Then we go down the street of San Pedro and we will arrive at the Puerta del Camino. The name of the door was due to the fact that it was the door through which pilgrims of the French and Primitive Way entered the walled city of Santiago. It was also the door that kings and princes passed through upon their arrival in Santiago. Today there are no remains of the gate, since it was demolished in the nineteenth century, however, pilgrims continue to enter Santiago through the place where the symbolic gate of the Camino stood. After walking through its streets, through Praza Cervantes and Rúa da Acibechería, we finally reached the final destination, Praza do Obradoiro and the Cathedral of Santiago. It is a moment of full happiness! Emotions surface and we sit down to observe the grandeur and beauty of the Cathedral of Santiago before going through the Holy Door, open only on Holy Year, to marvel at the interior of the cathedral.

In the next post we will talk about Santiago and the traditions that surround the celebration of the Apostle’s festivities, which takes place on July 25th of each year.