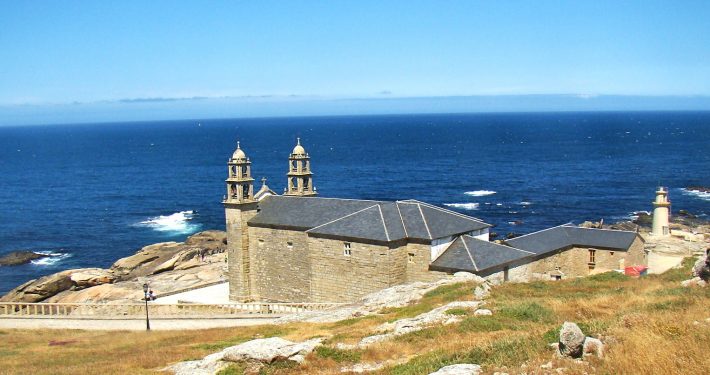 The Camino de Santiago does not always end in Santiago. Since the Middle Ages, many pilgrims have decided to continue their journey beyond Santiago to reach the last stronghold of the known land, the famous end of the world, one of the westernmost points of continental Europe, which had in ancient “Finis Terrae” its most extreme corner. The villages of Muxía and Fisterra are the final destinations of this route. The magic and mysticism of these places surrounds the pilgrims throughout the pilgrimage, the purity of the waters helps them find peace with themselves and purify their souls.

Muxía is a small fishing village located in the northwest of the province of A Coruña, which barely exceeds 4,500 inhabitants. Muxía is a town full of emblematic places that we can find along this section of the Camino de Santiago, impressive natural landscapes, full of legends and traditions that captivate the pilgrim. During this section of the Camino de Santiago, you can enjoy spectacular constructions such as the Iglesia de la Barca, where the sea roars loudly on stormy days, as well as the Moraime Church, in Romanesque style dating from the twelfth century, that takes us temporarily to times of Alfonso VII of León. In addition, we must not forget to take a break on the way through Touriñán to watch the last sunset in Europe, a sunset that will make every visitor fall in love with. Once the sun disappears on the horizon, Touriñán will guide the dark nights of the sailors who sail our untamed seas.

Apart from enjoying the wild landscapes and the beautiful buildings, Muxía is also known for its legends, such as the legend of “A Furna da Buserana” or that of the “Virgen de la Barca and the secret of her stones”, among others. The legend says the Virgin appeared in Muxía, where the Church of A Barca is today, to give encouragement to the Apostle Santiago. From that moment, a beautiful legend began to develop that says the Virgin appeared in a stone boat whose remains rest at the foot of the sanctuary nowadays. In this way we have the “stone of abalar” or “logan stone” of which it is said that it could be the stone boat in which the Virgin came. Legend tells us that people who were free from sin could move the stone. It is also said that when the stone “swings” on its own, it did so to herald a misfortune. Today, the stone no longer moves because it was broken by multiple storms that lashed the area. Another one of the symbolic stones of the place is the “cadrís stone” which is shaped like a kidney and was believed to be the sail of the boat. Healing properties are attributed to it and if you pass under it nine times it cures back pain. Finally, the “rudder stone” which is shaped like a rudder and is believed to have been the rudder of the boat where the Virgin appeared.

Muxía, apart from being famous for being one of the places at the end of the Camino, for its emblematic sanctuary and the secret of its stones, is also famous for its festivity. During the second weekend of September, the Barca festivity takes place in Muxía in honour of the Virgen de la Barca (The Virgin of the Boat). It is one of the oldest and busiest festivity in Galicia. The devotees come to Muxía on pilgrimage from different places to attend the masses in honour of the Virgin. For four days the village is crowded with visitors who come to enjoy the processions, music and fireworks that are mixed in the celebrations in honour of the Virgin. For these and many other reasons, Muxía is a magical place that enchants every pilgrim who visits it.

Next article The Art of Wine in Calabria