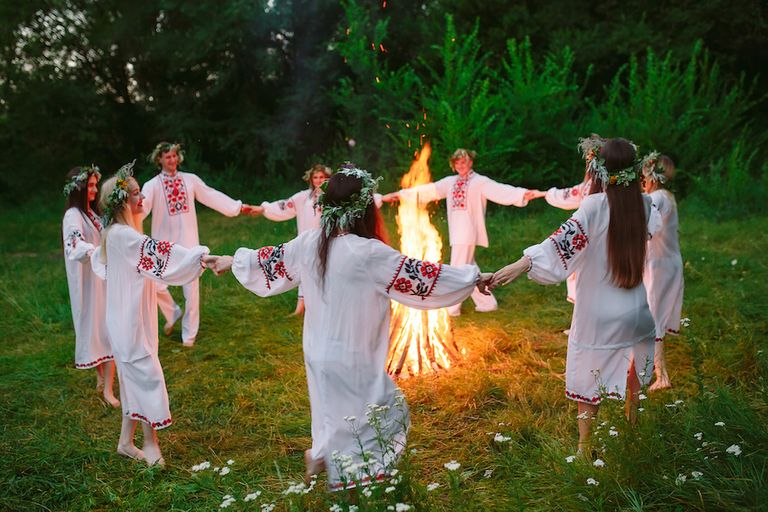 Slavic culture is extremely complex and vibrant. It is marked by a myriad of holidays which are celebrated nowadays. One of the customs associated with Slavic culture is the Night on the Eve of Ivan Kupala, also known as Saint John’s Night (Polish “Noc świętojańska”, “Noc Kupały”, or “sobótka” – meaning “Saturday”). It is a traditional Slavic holiday taking place on the shortest night of the year, namely, the Midsummer Day, which is on 23-24 of June, at least in the case of western Slavic countries.

The name originated from Saint John’s the Baptist that was supposedly born six months before Jesus (hence the date of this event), as well as the stem Kupala which was a word meaning “bathing” or a proto-Slavic word kump for “gathering”. Nonetheless, the celebrations included feasting, meeting with neighbors, and praising God. On that day, people gathered near the fireplaces, dancing around and singing. It was also believed that water had a purifying effect, making people healthy and exhilarated, therefore, baths in lakes and rivers were common. The girls laid a wreath on water and were hoping that a beloved boy would catch it, which was a sign of good fortune and upcoming marriage. Unfortunately, some wreaths could get caught in bushes, foretelling problems. People were adorning their houses with flowers and plants such as white lilies, birch, and fennel, as well as with lamps, which were later referred to as Saint John’s Fires. Their function was to ward off evil spirits. Therefore, the symbolic elements of this event are medical plants, fire, and fare.

This tradition had started before Christianity. However, the pagan tradition was later reestablished and combined the elements of folklore and religion. Nowadays, the event is still celebrated, but it involves church services and bonfires with a feast.

This is just one of the many examples of Slavic traditions. Now, on the day of the next summer solstice, try to recall this joyful evening. Perhaps, having celebrated it once, it may become a new tradition for you and your close friends and family.