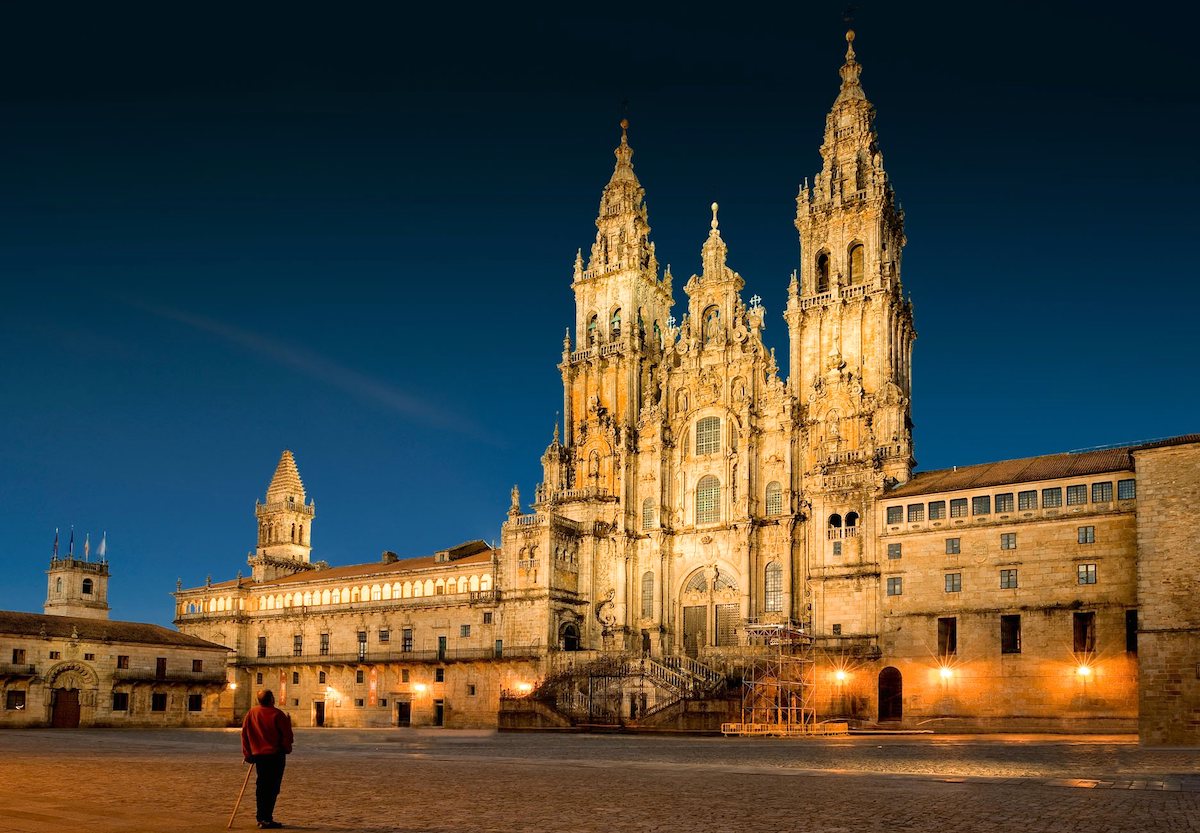 After a long journey, we arrived in Santiago. For hundreds of kilometres we have connected with nature, crossing green meadows, medieval bridges over mighty rivers that transport us to the Middle Ages for a few seconds, and letting the breeze gently touch our faces while we conquer the top of the mountains of the Way. It has been a unique and wonderful experience, which has allowed us to find ourselves and enjoy a beautiful landscape.

Now it is the time to marvel at this city, a pilgrimage destination, to enjoy its history, to lose ourselves in its cobbled stone roads discovering the most beautiful corners that we can imagine.

We thus begin by discovering the monumental Cathedral of Santiago located in Praza do Obradoiro. It is considered one of the most beautiful buildings of religious worship in Spain. Its architectural style is a mixture of Romanesque and Baroque. According to tradition, the cathedral houses the tomb of the Apostle Saint James, hence the fact that it became one of the most important pilgrimage destinations in all Europe. In accordance with Christian tradition, the Apostle Saint James was beheaded in Jerusalem and the remains were transferred to Galicia. However, as a result of the different struggles with the Romans, the tomb of the Apostle fell into oblivion and it was not until the ninth century that the tomb was discovered. It is then that King Alfonso the Second ordered the construction of a chapel in this place, becoming the first pilgrim in this sanctuary. Little by little, the pilgrimage to Santiago is gaining devotees and in the twelfth century, Pope Calisto the Second declared that every year in which July 25th falls on a Sunday it would be considered “Holy Year” or “Jubilee Year.”

The exterior of this imposing cathedral has several entrances, with their respective facades and squares. The entrance to the Pórtico da Gloria is the main one. It is located in Praza do Obradoiro. It is in the baroque style and has become a symbol for the city. The Facade of Praterías, facing south, is the only facade that is preserved in the Romanesque style. The Facade of Azabachería, oriented to the north where the last stretch of the Primitive, French, English and Northern Way arrives. And finally the east or Quintana facade, which is located in the square that bears the same name. On this facade, we find the “Holy Door” that opens only when it is Holy Year. The tradition is that a ceremony is held each year that the door is opened and that it remains open throughout the Holy Year. Apart from the different facades of the cathedral, its towers are also important, such as the Torre da Carraca, the Torre do Reloxo, the Trinidade and the Berenguela.

If we go inside the temple, we find different chapels, including the Main Chapel, with the image of Saint James that can be accessed by climbing some stairs located at the back and thus giving the traditional hug to the Saint. We can also visit the Sepulchral Crypt where the tomb of Saint James and his two disciples is. Most of the pilgrims who come to Santiago have the tradition of listening to the Pilgrim’s Mass and seeing the Botafumeiro, a huge censer that is filled with charcoal and incense and moved throughout the temple by a system of pulleys and pushed by a group of eight men, the “tiraboleiros”. According to tradition, in the past the Botafumeiro began to be used to perfume the temple and eliminate the bad smell of pilgrims. Today, its use is more symbolic.

After discovering the corners of the cathedral, we go to Praza do Obradoiro where we find the Hostal de los Reyes Católicos, which was formerly a hospital. It was built after the visit of the Catholic Monarchs to Santiago and its main function was to welcome pilgrims who needed help after completing the Way. Today it is a “Parador” to sleep. We continue with our walking tour through the historic centre, with endless buildings with history, museums, alleys and squares that all visitors fall in love with. Thus we find streets like Rúa do Franco, where we can try typical food, or buildings with history such as churches, monasteries, convents or manor houses, such as the Pazo de Fonseca, which now belongs to the university. Another of the most visited places in Santiago is the Market of Abastos, where you can buy local and traditional products. Finally, it is also important to relax with wonderful views, such as in the Alameda de Santiago or enjoy a walk through the Bonaval Park, near the access to the city of the French Way.

The festivities of the Apostle are also an attraction for pilgrims. Many of them try to arrive in Santiago on July 25th, the day of the Apostle Saint James and the day of Galicia. This celebration began in the Middle Ages and it was a special day in which different privileges were granted, such as acquiring forgiveness for sins. The celebration of the day of Saint James was a very ancient tradition, a festival established in Rome and which is believed to have begun to be celebrated annually from the end of the 14th century. Today, the celebration continues accompanied by concerts, fireworks and religious celebrations attended by pilgrims and devotees from all over the world. Santiago is undoubtedly one of the most beautiful cities in Spain, a city that everyone falls in love with and that everyone should visit.