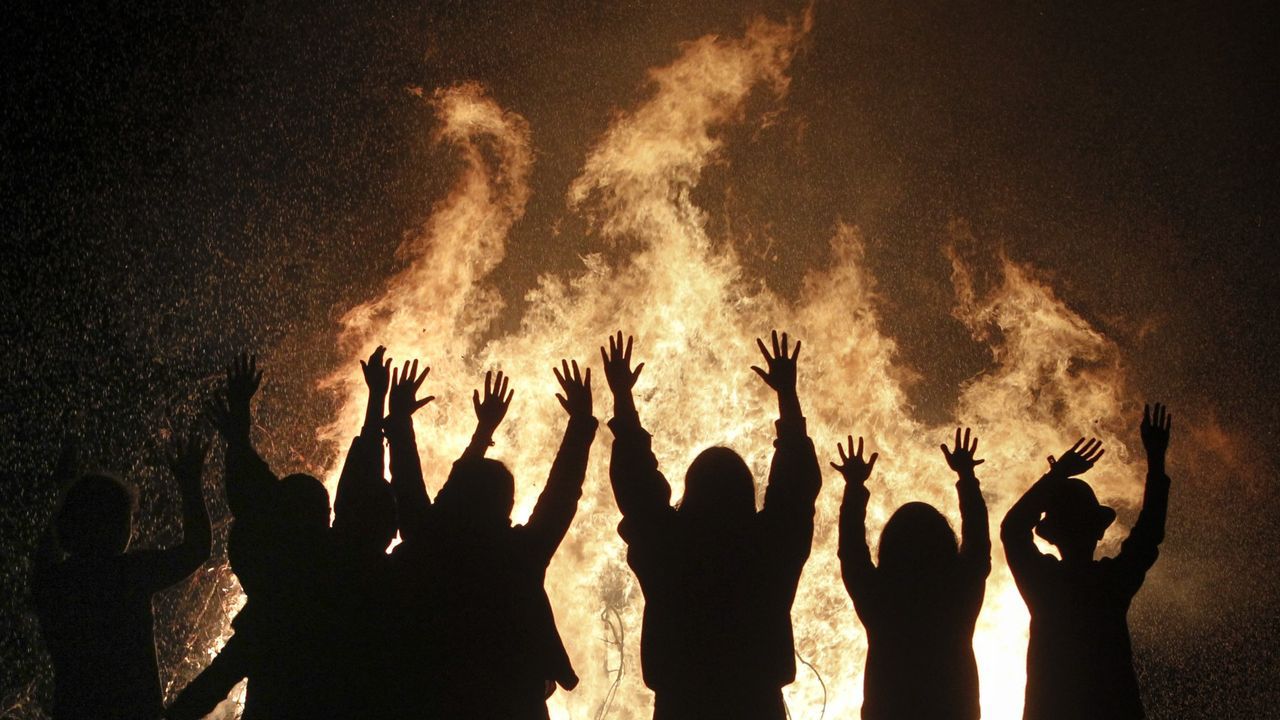 The beaches and squares of much of Spain fill up every year during the Night of San Juan, which unites Junes 23rd with June 24th. During this night bonfires and many other festivities are celebrated to commemorate a millenary tradition of uncertain origin that has evolved over the years but which undoubtedly preserves an essence that has stood the test of time.

Theories suggest that fire has always been the protagonist of this celebration. In fact, some experts assure that 5,000 years before Christ, coinciding with the summer solstice that takes place on June 21, a festival very similar to that of the current Night of San Juan was already celebrated in the northern hemisphere in the that the bonfires were the protagonists.

One of the theories supports that the inhabitants of the northern hemisphere lit bonfires every June 21 to purify themselves and feed the sun in order to encourage it and give it strength so that it does not stop rising; As from that date, each day this star would illuminate the northern hemisphere for fewer hours until the arrival of the winter solstice, at which time the longest night of the year would occur.

Another theory points to much more romantic reasons. In fact, he defends that our ancestors believed that the sun was in love with the Earth, and that every year, just on June 21, it refused to abandon it. To honor the relationship, they celebrated and bonfires were lit.

There are also those who point to the Celts as the creators of this tradition. It is said that during the summer solstice, Celts lit large bonfires to seek the blessing of their lands and ensure that they bore enough fruit to feed themselves. In addition, through fire they asked divinity for a prosperous future for couples in love and fertility for women.

What all theories agree on is that everything changed with the advent of Christianity. Christian society absorbed this tradition of pagan origin and turned it into the commemoration of the birth of Saint John the Baptist, who, according to what is established in the Bible, was born on June 24, the date on which the celebrations that had hitherto had taken place took place. honored in the sun.

As far as Galicia is concerned, the night of San Juan or “Noite de San Xoán” is one of the most important anthropological festivals in the region. For example, it is celebrated in A Coruña with the traditional bonfires on its beaches, this being the most massive festival in Galicia to the point of having been declared a Festival of International Tourist Interest.

Many rites of a magical or superstitious nature are associated with this celebration: jumping the bonfires, putting a bouquet of San Xoán herbs on the doors to protect themselves from the witches or, at dawn, washing their face with water in which they had remained throughout the the night the 7 herbs of San Juan.

The Eve of San Juan or Night of San Juan is actually, and as we have already mentioned briefly, a Christian holiday of pagan origin. In the Celtic calendar this festival corresponds to Lithe, the other great solstice of the year, that of summer. This date marks the beginning of summer, but also the beginning of the shortening of the nights. Lighting large bonfires during this night was and still is one of the most popular activities since popular tradition considered that doing this would make the longest day of the year even longer. It is also said that at the time when the Celts and Castrexos inhabited our region, they considered that the fire of the bonfires gave more strength to the sun. In addition, already at that time it was normal to jump over them and then bathe in the sea, as a purification ritual.

At present, it has been established that the Night of San Juan is celebrated on the night of June 23-24. However, in its beginnings the celebration of this festival depended on the lunisolar calendar and the holidays with solstices. In the same way, when we hear that “the night of San Juan” is the shortest night of the year, we can explain that this premise is not entirely true since, in reality, the shortest night of the year corresponds to that of the day in which the SUN spends more time on the horizon. Phenomenon that occurs in June in the Northern Hemisphere and in December in the Southern Hemisphere. That is why the beginning of summer in the Northern Hemisphere can occur – at least – on three different dates of the current calendar: June 20, 21 or 22. What is certain is that at the beginning of our era, Before the corrections applied to the Gregorian Calendar, the summer solstice used to coincide with the night of June 23-24. And hence the origin of the confusion.

As we have already mentioned previously, bonfires are – perhaps – one of the symbols that best represent this festival throughout the length and breadth, not only of our region: Galicia, but of all the coastal regions of Spain. The bonfires, also known as «cacharelas», «cachadas», «cachelas» or «lumeiradas»; were and continue to be prepared during the previous days by young people and neighbors who little by little collected various materials in open places located in public places such as squares or beaches for – later – with the arrival of witching hour (12:00 of the night) set fire to the bonfires amid the expectation of all the neighbors and passers-by.

But the night of San Juan is not only marked by bonfires but this celebration goes hand in hand with Gastronomy like practically all celebrations in the region. Traditionally during this night grilled sardines are eaten accompanied by “brona” bread made with corn flour and rye characterized by the density of its crumb. Also typical are “cachelos”, potatoes roasted with their skin. The meal is accompanied by wine and songs around the bonfire.

However, the most typical drink tonight is “Queimada”. A concoction composed of burning water, fruits, flambé sugar and that is prepared in an earthenware bowl while a spell is recited in order to expel the witches. On the other hand, the sweet touch is provided by the “filloas”, the “orellas de frade” and the “chulas” (a mixture of flour, egg and milk).

The celebration of San Juan in the city of A Coruña:

On the night of June 23-24, the entire city takes to the streets in order to celebrate what is considered by its inhabitants the most magical night of the year. We can find bonfires in all neighborhoods. However, the largest is concentrated in the beaches located in the heart of the city: Riazor and Orzán. The people of Coruña celebrate the arrival of summer by filling the beaches with bonfires, making sardines and a continuous atmosphere of party and celebration that each year attracts more tourists to this our city, attracted by the magical atmosphere that is breathed during the shortest night of the year.

Traditions of the Night of San Juan in Galicia:

The Galician saying says “polo San Xoan a sardiña molla o pan” (for San Juan the sardine dips the bread) which means that in San Juan the sardine reaches its best flavor, therefore as part of the celebration of the Night of San Juan often enjoys a dinner with family and friends enjoying this rich blue fish.

It is another of the most popular traditions in Galicia. The Playa de la Lanzada and the Night of San Juan come together in this ritual in which all those women who want to be mothers have to jump nine times the waves of the sea that break on this beach in the Rías Baixas.

Those women who want to have children will jump once after midnight and with their backs to the sea. According to this tradition at nine months they will hold the result of this ritual in their arms.

It is another of the most well-known and widespread rituals: washing your face with what is known as “Agua de San Juan”. At dusk on the 23rd, it should be immersed in water and let a bouquet of herbs and flowers rest, the next day you will wash your face with that water that, according to legend, helps to purify the soul, but is also good for the skin.

An example of a perfect bouquet and keeping superstition in mind would be made up of 7 herbs:

The mirrors: If you are superstitious, watch out! When you wash your face with the Agua de San Juan, at midnight, do not look in the mirrors since the legend says that if you have performed any of the rituals that we have mentioned previously and you look in the mirror, they will lose their effect and they will not be fulfilled.

Previous article“Noc świętojańska”, “Noc Kupały”, “sobótka” - the Slavic celebration of on the shortest night of the year, namely, the Midsummer Day