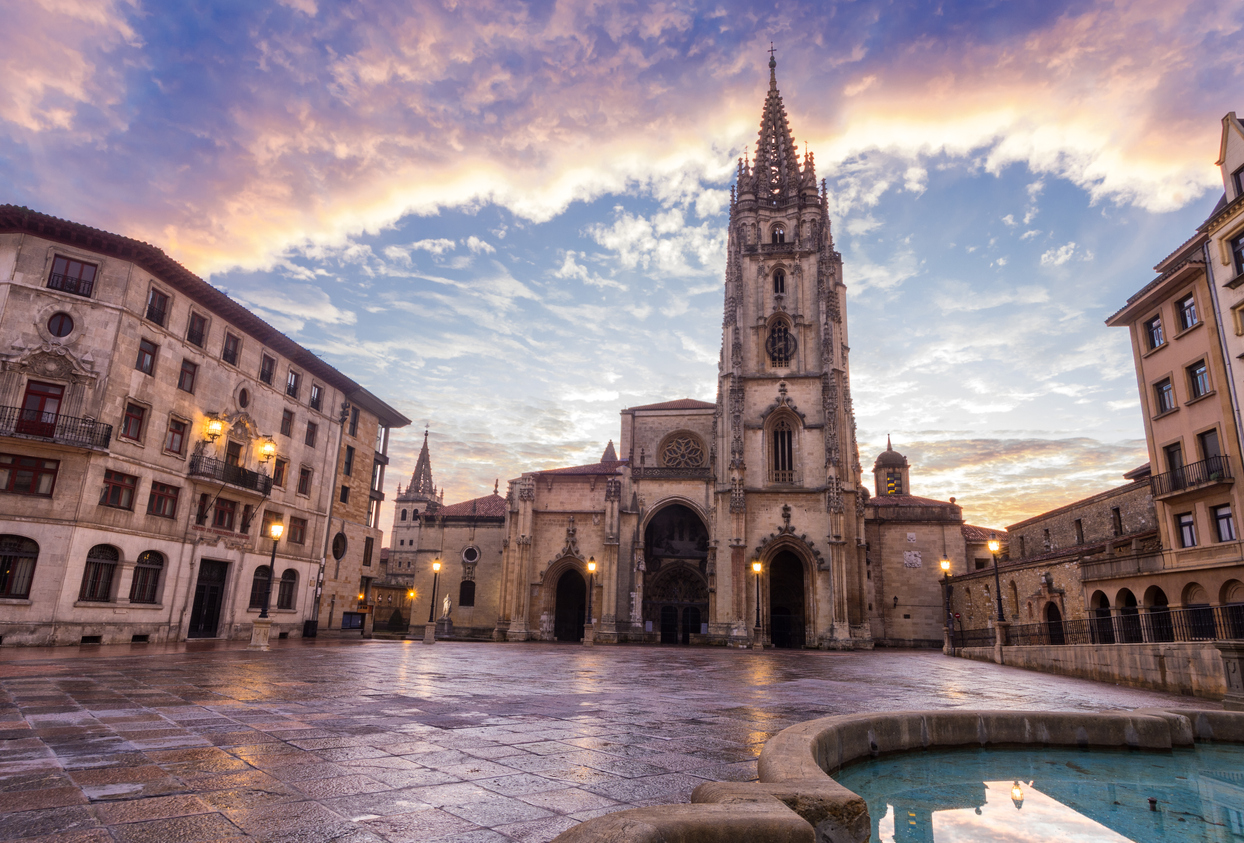 The history of the way to Santiago de Compostela does not start in the woods of Libredón, where the funeral remains of the Apostle Santiago were found. Neither in Jerusalem, where the disciple was executed. The origin of this holy way is to be found in the city of Oviedo (Asturias). The city in which, the ancient King Alfonso II, located his court after ascending to the throne in 891.

But… Why is the city of Oviedo so important for the why to Santiago? If you want to discover way keep reading!

The city of Oviedo was already founded in 761 near to a strategic crossroad for the merchants of the time. Therefore, the father of King Alfonso II – known as Fruela I – who wanted to apostille his power created the first basilica in honor of the savior as well as other important and religious constructions. Later on, once the power was transferred from Fruela I to Alfonso II, the court was moved from Cangas to Oviedo and the city became really important at that time. Nonetheless, the city was reduced to ashes in 794 during the Muslim wars. However, Alfonso II plans for the city of Oviedo were bigger than the efforts of the Muslim empire to destroy the city. And, as a result, the city was recovered because the king wanted to convert the city of Oviedo in a cultural capital as, at that time, Toledo was. So, a basilica was again erected where today we can find the Cathedral of Oviedo, together with a Royal Pantheon and a Holly Chamber. These buildings were constituted as the palatial set and can still be found today.

At that time, there was a religious controversy among those believing in the Christian God. And Alfonso II had to face this religious break up during his government: catholic doctrine vs adoptionism. During this period the reign was surrounded by the Muslim Empire and the possibility of having a religious break up put the monarchy of the Kingdom of Asturias in a risky situation. The situation get worse in 783 when the archdiocese of Toledo passed into the hands of Elipando, a Defensor of adoptionism. Under Elipardo’s leadership other Spanish bishops as Félix de Urgell or Ascario de Astorga, followed him and joined the cause. The Kingdom of Asturias was represented by Beato de Liébana. He made use of his publication “Comments to the Apocalypse”, an interpretation of the Apocalypse of Saint John, that help him to led the fight against adoptionism.

The personality of Beato is also credited with the writing of a fundamental hymn: “O Dei Verbum”, in which the idea of ​​the apostle Santiago as evangelizer of the Iberian Peninsula is represented in stanzas such as the following one: “patron of the monarchy and the kingdom, takes shape, shining head of Spain”. It was a firm and forceful answer to the adoptionism theses. And Santiago was already the symbol of that resistance. In their fight against adoptionism, Alfonso II and Beato de Liébana found powerful allies in Charlemagne and Alcuino of York. Finally, the complaint was dealt with in two important synods, in which adoptionism was condemned and its promoters were declared heretics.

When Alfonso II reached the throne, only bad news came from the south. Muslim raids were frequent, and the Caliphate’s troops entered the Chaste King’s domain twice: 794 and 795. But the first is actually the preamble to a great victory: the Battle of Lutos. That year, Emir Hisham of Córdoba had sent two military incursions into Asturias, commanded by two brothers. One of them, Abd al-Malik, reached Oviedo with his hosts, looting the city and destroying the churches built by Fruela I. But on his return to the south, along the Camino Real del Puerto de la Mesa, the invaders were ambushed by Asturian troops and the Muslim general perished in the battle.

To defend his domains, Alfonso II sealed his alliance with Charlemagne and started an expansionist politic towards the west. Aspect that led him to repopulate Oporto and, even, take temporarily the city of Lisbon in 798. However, the fragility of his Kingdom was again palpable during the first years of the IX Century, when he had to abandon the court and find shelter in the Monastery of Ablaña because some nobles decided to reveal against him. It was only after the mediation of some loyal nobles that he was able to recover his throne.

It was also at that time when a hermit named Pelayo saw, during the night, a singular phenomenon taking place in the forest of Libredón, where today is located the church of San Félix de Solovio. In the middle of that forest, he saw some lights. And these lights were followed by strange dreams. So, he decided to explain what was happening to him to the bishop of Iria Flavia. The bishop, after fasting for three days, went to the forest of Libredón and there he saw the light that the hermit described. This light was pointing towards a place and, suddenly, he had a revelation. There, under that promontory, the funeral remains of the Apostle Santiago were found. It was this same bishop, Teodoro, who went to the court of King Alfonso II in Oviedo in order to tell him about this discovery. At that time, between the 813 and the 829, the Kingdom was again in a good position and had approached stability although the troops of the Kingdom of Asturias were still fighting against the Muslim. However, Alfonso II knew that the discovery of Libredón offered him a change to shore up his reign in both fields: the religious and the political one. In other words: the discovery will help him to achieve unity of belief and reinforce his link with the Christian Kingdoms beyond the Pyrenees.

The tradition tells us that the first person who pilgrimage to Santiago was Alfonso II. What makes him the first Jacobean pilgrim in History. On his arrival to the site, he ordered the construction of a church in the place where the rest where founded. That was the origin of the holy place that, referring to the miraculous find, was renamed “Campus Stellae”, the field of stars. A name that with time derived in the current Compostela.

After the discovery of the remains of the Apostle, the first Camino flourished. This first Camino – way – was called the Primitive (Camino Primitivo) and it connects Oviedo, the capital of Alfonso II, with Compostela. This route was not a technological marvel as many of the roads in use during the Middle Ages were vestiges of Roman times, even earlier ones, but they were capable of hosting an incessant flow of pilgrims, soldiers and merchants.

It must be understood that, in the medieval tradition, life was but a journey of learning, while the human being was a wonderer, a traveler, a pilgrim. In other words: a “homo viator”. The roads of the time also responded to this conception. They were decisive in facilitating human transit, but they were also a terrain of uncertainty, fraught with danger… as behind every bend, on every path, a rogue, a bandit, or even something worse might was awaiting. They were roads and ways that had withstood the passage of time with dignity and effectively and directly connected cities that were in turn, to a great extent, heirs to previous cities or towns. And thanks to the thrust of the Camino Primitivo, some towns arose and others flourished, each with its Jacobean history and legacy.

As the fame of Compostela, the destination of the Camino de Santiago, grew throughout Europe, the first origin of the Via Santa, Oviedo, was becoming somewhat in the background. A crucial event changed this situation and the very history of the city: the opening, in 1075, of the Holy Ark of the Cathedral, in the presence of Alfonso VI of León. During his stay, the monarch ordered to open the Holy Ark, which was said to contain incredible relics brought from the Holy Land. It was not a minor challenge: there was a superstitious fear of opening the box, since it was written that forty years earlier Bishop Ponce and several clergymen who accompanied him had gone blind when looking inside, due to the great glow that emanated from there.

The myth did not intimidate Alfonso VI or his entourage, in which Rodrigo Díaz de Vivar, the Cid Campeador himself, stood out. So, flanked by an army of bishops, they opened the mysterious box. On this occasion, they were not blinded by the glare, although they were amazed at the wealth of the relics that were kept there. Oviedo immediately became a pilgrimage center, recognized in 1438 by Pope Eugene IV with his own bull of plenary indulgence: the Jubilee of the Holy Cross.

Originally, the jubilee, which implied the exemption of all the sins of those who went to the Cathedral of Oviedo on the designated days, was celebrated in the years in which the feast of the Exaltation of the Cross (September 14) fell on Friday, as well as the eight days before or after this celebration. During the period that the Jubilee of the Holy Cross lasted, great celebrations were held in the city, which culminated on the last day, September 21, with great solemnity. It is the origin of the San Mateo festivities.

The history of this important celebration took a turn in 1982, when the Victory Cross was returned to the Holy Chamber after its restoration of the damage suffered in the 1977 robbery: John Paul II extended the plenary indulgence, which has since been granted every year between September 14 and 21.

Previous articleGreater Polish Carnival traditions – nowadays and in the past