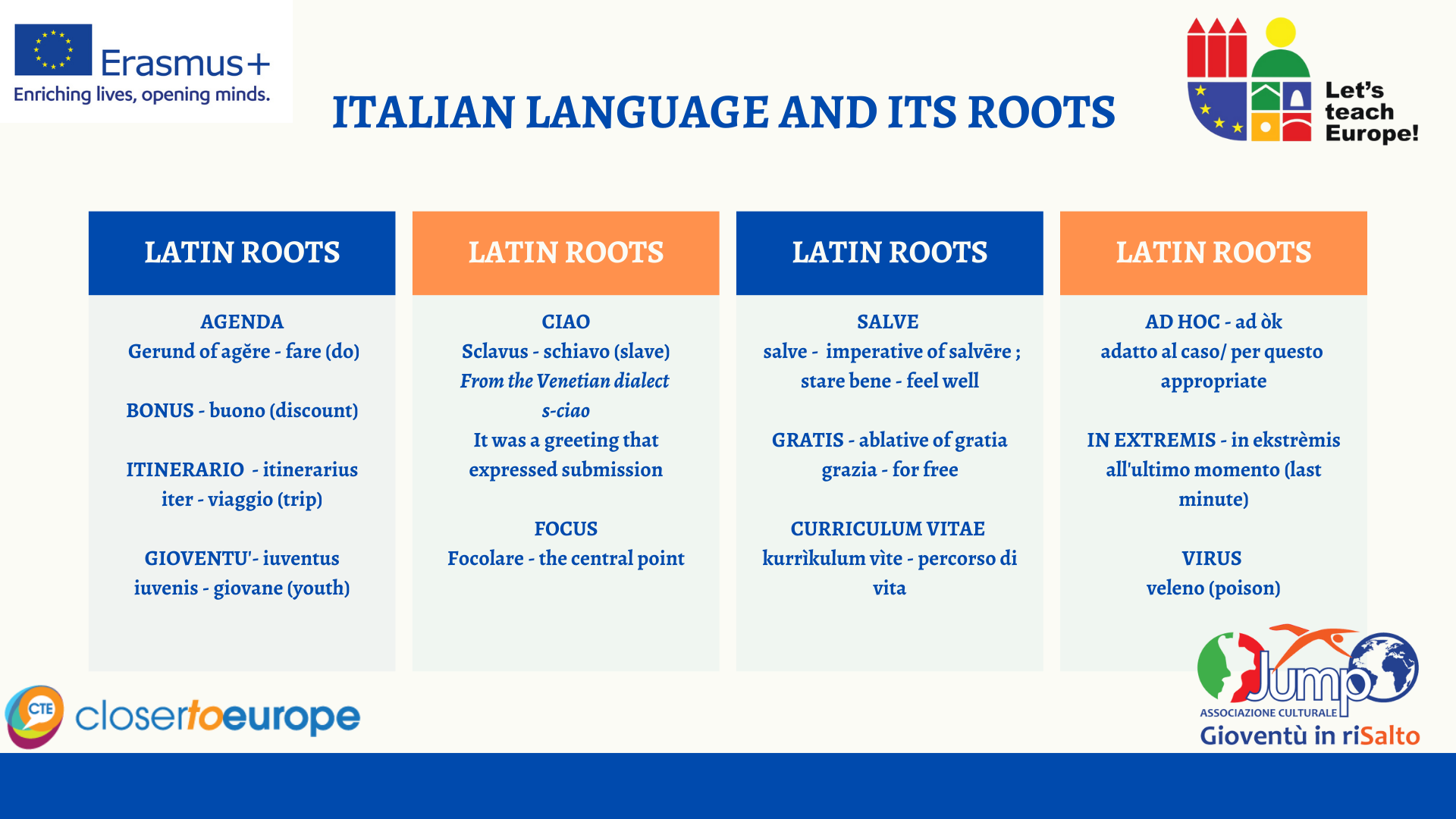 The Italian language has a huge number of words borrowed from the Greek language (Greekisms) and from the Latin one from which the Romance languages, still in use such as Spanish, Portuguese and French, have been developed. Among the neo-Latin languages, Italian is the one that most shows in its lexicon its derivation from Latin; also the Greek words have arrived in our Italian language passing through Latin and for this reason their orthography has often been Latinized.

There are thousands of Italian words derived from ancient Greek and phonetically adapted to the Italian language and used in everyday spoken communication, most of them in the sectorial languages (philosophy, medicine, biology, science, technology) and for the proper names of people.

About Latin, there is still a debate about its usefulness and the fact that it is considered a dead language, even though it has a great influence on written and spoken Italian which is considered the development of Latin. It is said that in order to speak Italian correctly, it is necessary to know Latin grammar, especially the verbal tense of the gerund from which many commonly used verbs are taken.

A bit of history
Latin was the official language of the Roman Empire, used as a lingua franca especially in its western part and with some changes in the eastern part, in the Balkan peninsula and in some parts of Asia.
In the imperial age important writers wrote their works in Latin, maintaining the classical literary language: Seneca, Lucan, Petronius, Quintilian, Tacitus. But in later times was born the cultural literary fashion of Vulgar Latin, the spoken language that will become the basis of the neo-Latin languages.

With the fall of the Roman Empire, Latin was still used for centuries as the only written language in the world: in the chanceries of kings, in the Roman curia, in the liturgy of the Catholic Church, in the production of books.

Around 800 Charlemagne gathered around him the greatest scholars of the time giving he task of reorganizing culture and teaching in the territory of his empire, restoring the correctness of Latin, which had become too artificial and far from the spoken language.
After the year 1000, medieval universities were born and teaching was strictly in Latin, more advanced than in the times of Cicero and Horace.

Latin is still a subject of study in Italy in the classical, scientific and humanities high schools, but also in some Swiss, Spanish, French, English and German high schools.

Curiosities about Italian Dialects
Many dialects of Southern Italy are similar to Latin. In Sicilian, Calabrian, Apulian, Campanian and Lucanian dialects there are many Latin forms especially in verbs:

– venisti, facisti, vidisti, mangiasti –
They are all Latin perfects and still used with the same meaning!

After this historical excursus, you can find here a list of Italian words of Greek and Latin origin.