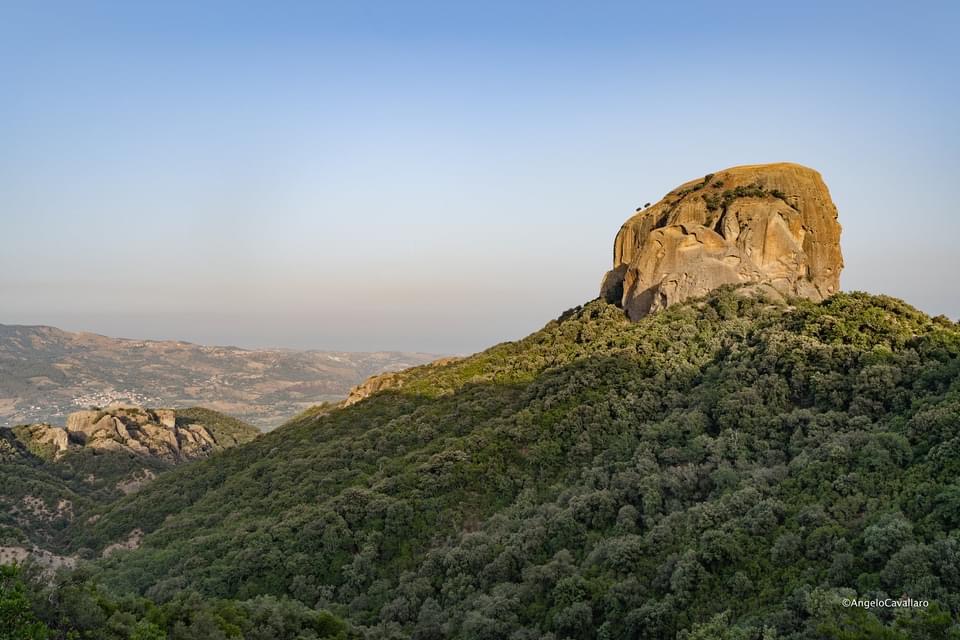 We are in the north-eastern area of Aspromonte National Park, called “Valley of the Great stones”, in the municipalities of San Luca and Careri. This area was chosen, many centuries ago, by the Basilian monks arrived from the East, who were looking for impervious and lonely places, ideal for their ascetic and eremitic life. Here, the immense megalith known as Pietracappa dominates the landscape.

Pietra Cappa (its name apparently derives from the idea of “inverted cup”, referring to the cavity inside the stone) is a huge boulder, 140 metres high, that stands out as one of the highest monoliths in Europe. According to recent studies, many geologists believe that its rounded shape was molded by the action of the last ice age which made it very similar to a panettone (Italian Christmas Bread)! The huge rock became the symbol of the Aspromonte Geopark, carrying the charm of an unspoilt landscape and the mystery of the legends about its origins.

Along with the Queen of the Apromonte, in the “Valley of the Great Stones”, this unique area immersed in forests of chestnut trees and oaks, you can find other monolithic rocks with extravagant shapes, like “Pietra Castello” (Castle Rock), with the ruins of ancient fortifications, the grandeur of “Pietra Longa” (Long Rock) and the roundness of Stranghiolo.

The mysterious scream inside Pietra Cappa

Calabria is a region full of mysterious places and numerous are the legends and the folk tales handed down from one generation to another. One of these is about Pietra Cappa: it seems that it is possible to hear a scream coming out of it.

That howling inside the Pietra is supposed to be sergeant Malko, the one who slapped Jesus during his interrogation, who was condemned to eternal penitence by Saint Peter.

Whatever might be the true origin of Pietra Cappa, this place attracts numerous visitors, fascinated not only by the mystery of the legends but also by enchanted paths and landscapes that shine in the colors of the rich vegetation around.

Enjoy this breath-taking view of the Calabrian landscape!