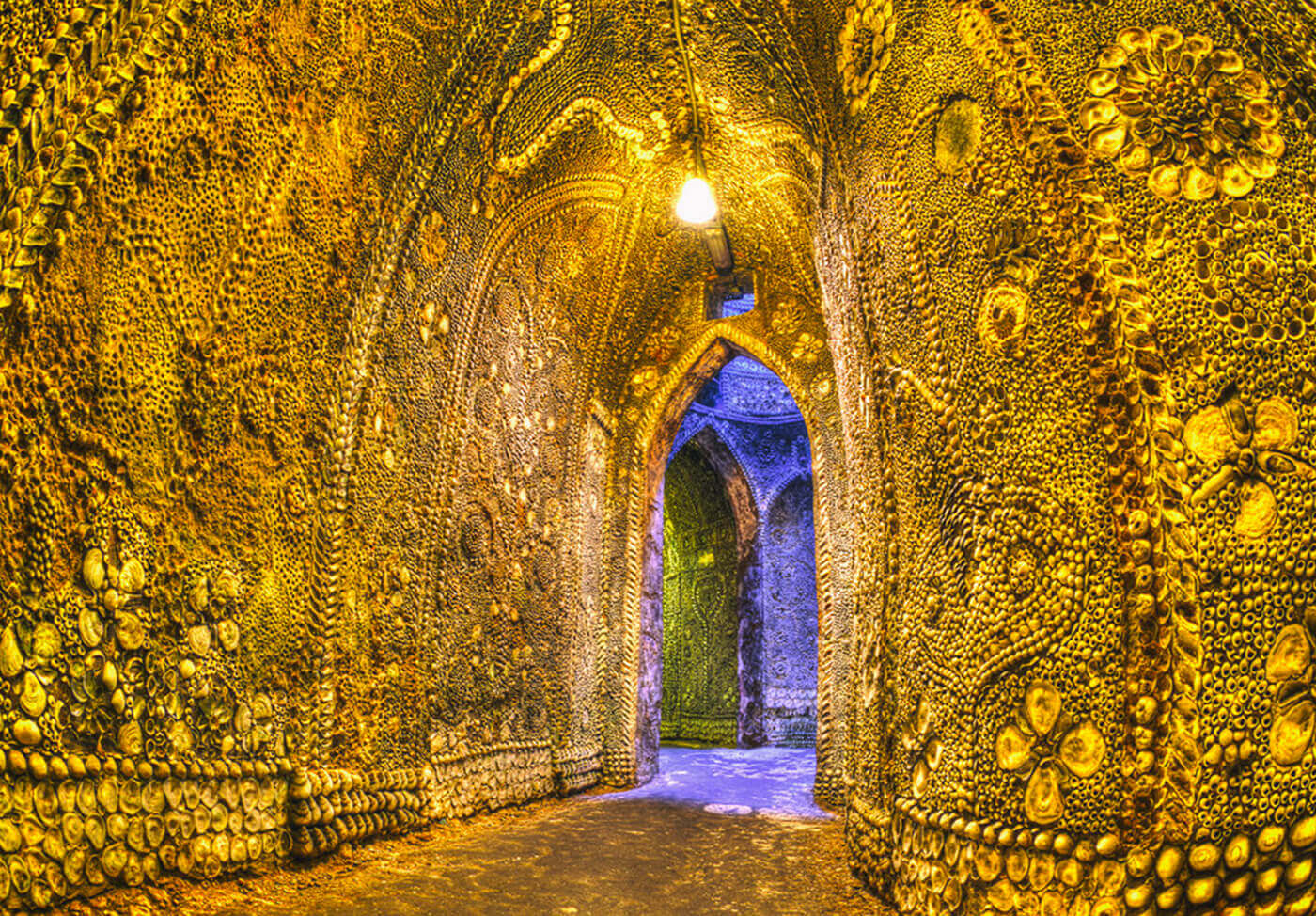 The Shell Grotto is an ornate subterranean passageway shell grotto in Margate, Kent. Almost all the surface area of the walls and roof is covered in mosaics created entirely of seashells, totalling about 190 m2 of mosaic, or 4.6 million shells. It was discovered in 1835, but its age and purpose remain unknown. The grotto is a Grade I-listed building and is open to the public.

Local legend says Margate’s Shell Grotto was discovered by chance over180 years ago, when in 1835 Mr James Newlove lowered his young son Joshua into a hole in the ground that had appeared during the digging of a duck pond. Joshua emerged describing tunnels covered with shells.

Its origins remain unexplained today. In this remarkable subterranean enclave, winding tunnels snake beside 2000 sq ft of magnificent symbol mosaics, made out of cockle, whelk, mussel and oyster shells. Nobody can explain who built this amazing place, or why, but since its accidental discovery visitors from all over the world have been intrigued by the beautiful mosaic and the unsolved mystery.

The excavations are entirely underground. Steps at the upper end lead into a passage about 1.07 m wide, roughly hewn out of the chalk, which winds down in serpentine fashion until it reaches an arch, the walls and roof of which here onward are covered in with shell mosaic. The arch leads to what is known as the Rotunda, a central circular column, meeting at the farther side at the Dome – a shaft rising to the surface, capped to allow some daylight into the structure. The plan of the sub-base of the Dome is triangular, equilateral, and with an arch in the centre of each side. The two arches in the sides are those leading from the Rotunda, whilst the arch in the base leads into the Serpentine Passage. This passage, with its curving walls and over-arching vaults, is rich in mosaics of varied design. At the end of the Serpentine Passage, a further arch leads into the Rectangular Chamber. Here the decoration takes on a more formal and geometric character, but still finely drawn and executed. The subjects are chiefly star and sun shapes. The focal point, the “altar”, is the arcuate niche which faces the entrance arch.

The purpose of the structure is unknown and various hypotheses date its construction to any time in the past 3,000 years. With no proper scientific study, it’s impossible to say when the grotto was built. So, there are all sorts of theories, the most popular one is that it was an 18th or 19th-century rich man’s folly; another is that it was a prehistoric astronomical calendar and another popular is that it is connected with the Knights Templar or Freemasonry.

There are several examples of such “useless” buildings around the country, found in the grounds of stately homes and wealthy landowners. Others believe that the grotto is much older because of the complete lack of historical records of its existence and construction, which would have been, they argue, a mammoth task, sure to attract the attention of the neighbours. A story such as this would have been impossible to be forgotten in a mere hundred years.

Since the 2007 discovery of a domed cave under the Palatine Hill in Rome with shells, mosaics and marble in similar patterns to those in the Rectangular Chamber in Margate, some credence has been given to the theory that the Shell Grotto could have been created by the Phoenicians in the second half of the first millennium BCE, when they were founding many colonies from their base in Carthage.

Unfortunately, the Grotto and its fragile shells are under threat from damp, which means it’s been listed as a ‘Building at Risk’.

The structure has also suffered the effects of water penetration, though was removed from the Heritage at Risk Register in 2012 after a five-year conservation programme, carried out in partnership with English Heritage. A scheme to sponsor replacement mosaic panels – The Roundel Project – was established in 2012.

The Friends of the Shell Grotto was formed in 2008 and is a not-for-profit trust established to promote, conserve, and preserve the grotto as a unique historical monument. It worth a visit to explore this enormous heritage of Southeast England.