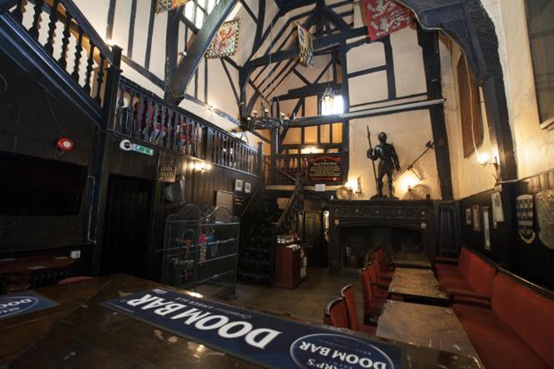 The Red Lion Inn is a Grade II listed pub, built in the late 15th/early 16th century, at 55 High Street, Southampton, Hampshire. It is on the Campaign for Real Ale’s National Inventory of Historic Pub Interiors.

The building dates back to 1148 – back then ruling the roost of the country was King Stephen – also known as Stephen Of Blois.

The pub is a big hit with people wanting to find out about Southampton’s haunted past. As a historic pub which was established as such in 1552, the building naturally boasts some stunning architecture.

Knight’s armour looms over an authentic fireplace, overhead are original Tudor beams and the walls are lined with medieval weaponry.

The walls of The Red Lion certainly have many tales to tell. The most intriguing stories date back further than the building’s beer drinking days.

The pub was a merchant house in the 12th century, but by far the most significant historical element is the main drinking area, which served as a court house during the reign of Henry V.

This room is famous for the trail of three noblemen who conspired against Henry V in 1415. The gentlemen were found guilty and taken to the Bargate to face a grisly execution.

The half-timbered room known as the court room was the site of the trial of the conspirators in the Southampton Plot. This appears to be a local legend. The trial took place in 1415, about 75 years before the foundation of this building, and there is no documentary evidence from 1415 that would locate it here. In any case, the plotters were imprisoned in the castle and it is unlikely that they were moved down the High Street for a trial in an inn when the castle afforded ample facilities. A mournful procession of ghosts reportedly sighted leaving from the inn has been linked to the plotters.

For many years, the triangular plot in front of The Red Lion was the landlord’s garden. It was also a traffic bottleneck, ‘Bitterne Fork’, where the rural High Street (now Bitterne Road) was joined by a country lane (Bursledon Road). The V-shaped fork has long been replaced by a pedestrian precinct. The Red Lion remains, built in the 1860s, in front of an earlier pub of the same name. The original Red Lion, from the 1830s, was a coaching inn.

The pub is said not just haunted by one ghost but it is rumoured to have 21 phantom patrons. It is not surprising as the cellar in the Red Lion can be traced as far back as 1148, and the main building hails from the Tudor era.

According to Haunted Rooms the pub was the location for the treason trial of the Southampton Plot Conspirators – Richard, Earl of Cambridge, Lord Scrope of Masham and Sir Thomas Grey of Heton.

It’s safe to say you are never drinking alone if you go for a pint in Southampton’s Red Lion public house.