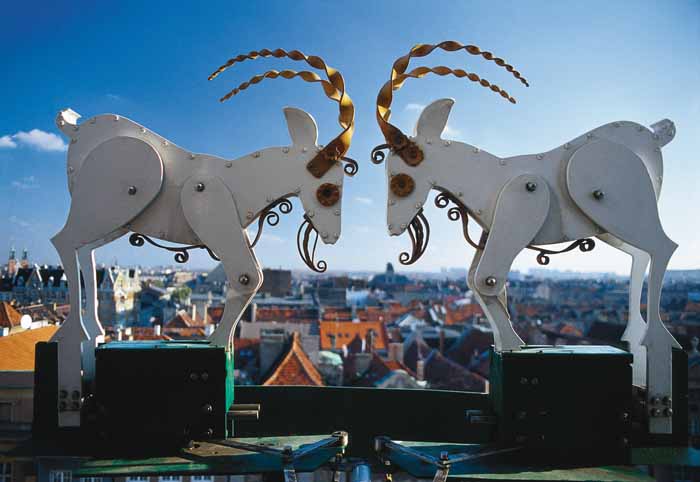 During a midday walk through the colorful market square of Poznań, among colorfully painted old buildings, you will watch a 465-year-old fight between a famous couple of mechanical goats.

The two white billy goats head-butting every day at noon, are one of the biggest attractions as well as the famous icon of Poznań. Although many tourists and people from Poznan willingly watch this spectacular event in the Old Town, not many of them are aware of how the goats became a symbol of Poznań.

According to a legend, their appearance on the tower is not a coincidence. In the 16th century, when the town hall was rebuilt after the great fire, it was decided to install a clock.

On this occasion, the elaborate feast for the mayor, his wife and some visiting dignitaries was organized. The main dish was supposed to be roasted venison haunch and the preparation befell a young kitchen hand named Pietrek (Pete in some versions of the legends). A lot of exciting things were happening in the marketplace at that moment. So much so that the kitchen hand took his eye off the roast for a second to watch what was going on in the marketplace. Unfortunately, his absence dragged on the roast was burnt.

The terrified boy ran to a nearby meadow where the city folk grazed their animals but he had only found two billy goats there. He dragged them into the town hall kitchen. The terrified goats managed to escape and fled up by the stairs to the highest clock tower, where they started to bash themselves with their horns. Poznan residents and guests were watching them from the Old Town. The whole situation made the governor laugh up to this point, that he decided to ask master Bartłomiej, the clockmaker, for commemorating this moment with two white goats on the top of the town hall tower in Poznan.

A new clock was in the works for the Town Hall, so the mayor ordered that two goats be added to the mechanism, cuckoo clock style. They got to take a long break in the battle, after their tower had been badly damaged in 1675. In 1913 they were restored to the clock, and they’ve been taking noonday center stage ever since. Luckily for the crowds down below it’s always a draw, so they’ll be back again tomorrow to fight another day.

Ever since then, once the bugle sounds at the stroke of noon, the assembled crowd has been treated to the two head-butting billy goats every day. The goats emerge to fight every day at noon in front of the entrance to the Town Hall. There is also a live trumpet call just before the hour strikes, a good reminder to stop and look up

Previous articleO Maio / The May (Celebration)

Next article The legend of the werewolves of Satriano