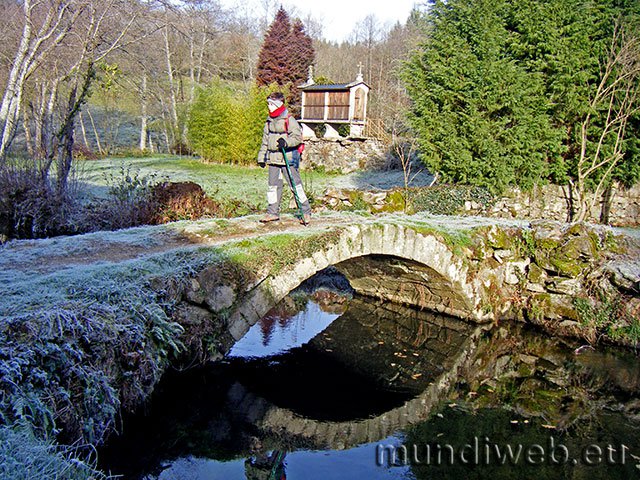 After discovering Lugo, getting lost in its cobbled streets, discovering its historic buildings, monuments and walls, and going back to Roman times, it is time to put our backpacks on and continue our way to Santiago.

We leave Lugo through the Miñá or Puerta del Carmen gate, the oldest in the Roman wall and the one that has suffered the least changes over time. Its name is due to the fact that it allows access to the Miño River, the longest river in Galicia. It has two towers that served as a refuge to the city guard. After exiting through the gate in the wall and crossing a Romanesque bridge, we arrive at the town of San Vicente do Burgo with an impressive baroque-style church dating from the eighteenth century.

We continue our way, but not before having turned off the main road for a couple of kilometres to visit the early Christian temple of Santalla de Bóveda, which preserves one of the most outstanding medieval mural paintings in the Iberian Peninsula, with extraordinary paintings, of great realism and with an awesome colouring. It was possibly built in the fourth century, although it is not known for sure.

After being fascinated by the magnificent murals of the temple, we return to our route and pass through Bacurín, where you can see a small Romanesque church dedicated to San Miguel. We continue our way and arrive at San Romao da Retorta and Santa Cruz da Retorta where we will enjoy the expressions of the Romanesque, with its churches and its Roman milestone – which indicated that the Primitive Way was oriented following the route of an old road. Finally, we will arrive at Ferreira, the final destination of this third stage of the Way.