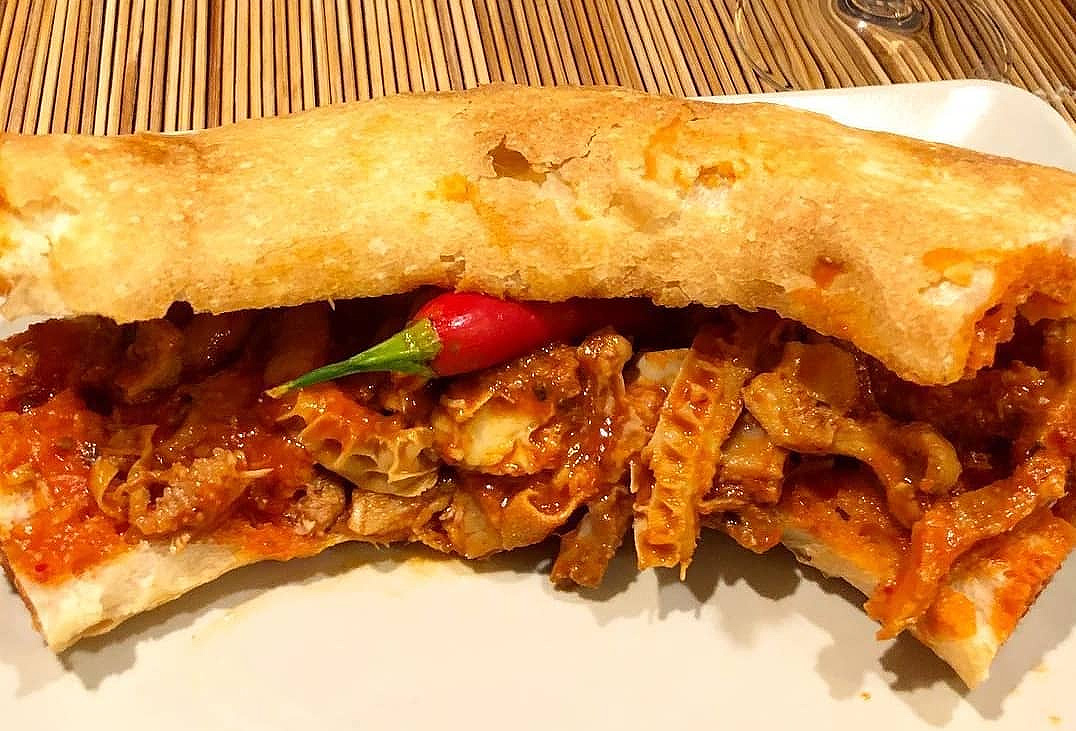 The origin of one of the most traditional dishes of Catanzaro, the capital of the Calabria region, is very old and linked with the legend of a poor young girl told by Achille Curcio, poet and writer of Borgia (CZ).
Based on veal, cow’s heart, tripe and lungs, tomato, peppers and hot peppers, “U’ morzeddu catanzarese” is a typical calabrese dish, considered the symbol of the city.

The historical references
Morzello could date back to the period of Saracen domination, at the end of the 9th century and the first decades of the 10th. There are traces of the Principato Mussulmano in Calabria begun in 906 and lasted beyond thirty years.
In the gastronomy of Arab and Middle Eastern countries there is a dish similar to “morzello”. It is a kind of flatbread, squashed with a dough similar to “pitta”, a type of round bread with a hole in the middle, which is covered with veal, seasoned and spicy sauces, with the absolute exclusion of pork.
Also the etymology of “pitta” refers to the Arab tradition and could derive from “Pita”
which is a type of leavened and round flat bread, traditional food of Middle Eastern and Mediterranean cuisines.

The etymology
There are many hypotheses about the origin of the name “morzello”. Calabria, in the past, was conquered by foreign nations which imposed not just rules for the territories but also their language. In Latin the word morsicellus means small bite, in French morsel means titbit and in Spanish almuerzo means meal. So, the etymology of this word “morzello” comes from the way of cutting pieces of meat, “morzha morzha”, which in catanzarese means in small pieces.

The legend
Chicchina was a poor woman who worked as a servant for some nobles of Catanzaro. During the Christmas period she was cleaning up the courtyard of the slaughterhouse where the cuts of meat were prepared for the festive meals of the nobles of Catanzaro.
She had the arduous task of disposing of the discarded cuts of meat at the Fiumarella landfill. The woman, instead of throwing those offal destined for the garbage, took them home, cleaned them up carefully, reduced them into small pieces, and then cooked them together with tomato sauce, water and various herbs, thus preparing a dinner for her family. Since that day, it seems that the dish acquired a great success, helping to revalue the less valuable cuts of meat, but not for this less tasty.

Next article A Ghost Town in Calabria