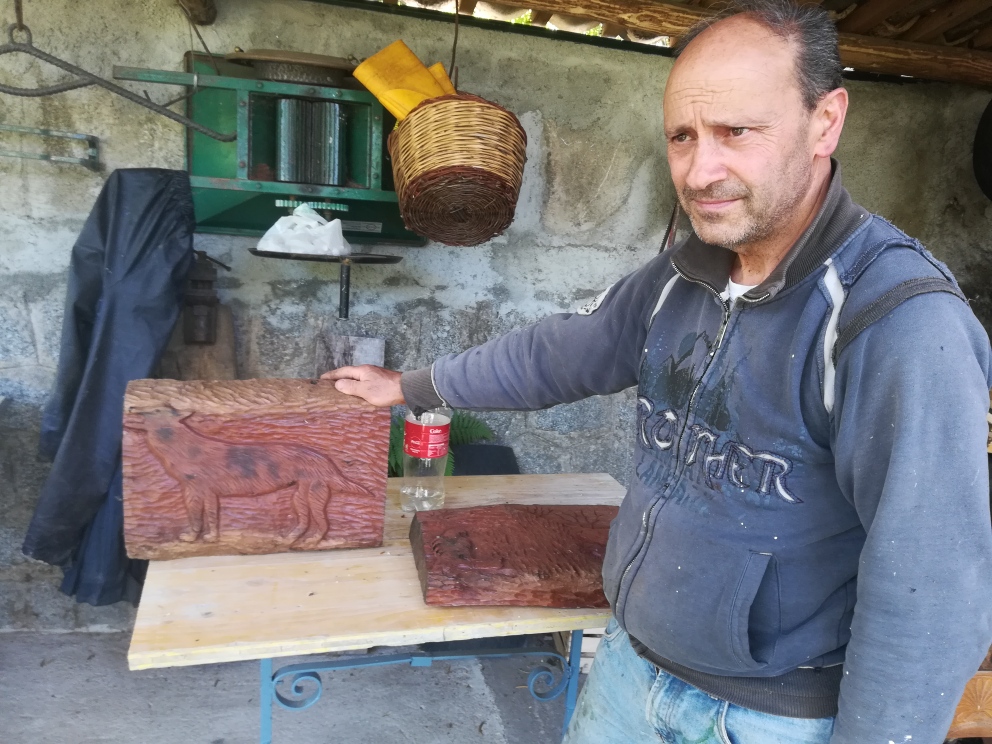 In Calabria, a region rich in forests, woodworking has always been widespread throughout the territory:

The so-called ‘cioccaioli’ of Calabria, for example, used to go into the mountains in search of heather (an evergreen shrub characterised by its fine reddish wood), with which expert craftsmen, the ‘pipari’, made carved pipes, which were much sought after at the time.

Today, it can be said that wood carving and sculpture are among the most researched and known phenomena of our land, and as evidence of this, there remain some decidedly fascinating works, characterised by attention to detail (Calabrian churches abound in such works).

The small village of Satriano (in the province of Catanzaro) also enjoyed a flourishing season, during which artistic production reached its peak (between the beginning and the middle of the 20th century).

The most famous and appreciated Satrianese artists are linked to the Drosi family name: Nicola (1817-1901), Pietro (1847-1929) and Michelangelo (1876-1969), known as the ‘Santari’, bequeathed numerous statues and sacred images that are still admired today in many towns in Calabria (but also abroad).

Historically, however, Calabria has always paid little attention to enhancing the artistic heritage inherited from local masters, and it is increasingly rare to find someone who still cultivates this passion.

This is why we feel fortunate to be able to admire and disseminate some of the modest works created by the ingenuity of Tonino Giampà from Satriano, who devotes himself (in his spare time) mainly to wood carving.

“Wood carving is a form of artistic processing of this splendid natural material, which has ancient origins and has always been one of the most important craft activities. The origins of this decorative art can be traced back to the need to embellish and make one’s surroundings more welcoming and to transform everyday objects into splendid artefacts, while at the same time expressing symbolic values linked to tradition”.

Giampà (a bricklayer by profession) uses different types of wood (chestnut, beech, olive, etc.), which are strictly dry and seasoned, depending on the work to be created, as they last longer and do not risk being split (or damaged in any way) either during some of the main processing stages (such as cutting to size and chiselling) or afterwards, when the work is finished. Many of his creations start with a drawing traced on glossy paper and then transferred onto wood (by means of a simple pencil rest and tracing).

Once this stage has been completed, the superfluous parts of the wood are cut out and all the details are finished off using a chisel. To level and smooth the rough and irregular parts (due to the use of the chisel) a gouge or in some cases a rasp is usually used.

Without going into further detail on the various steps involved in this technique, we can say that with the help of basic tools, it is possible to achieve appreciable results (without bothering with the use of electrical tools).

It is necessary to be creative, skilful in drawing, and at the same time have a lot of patience to carry out works that enhance and safeguard the artistic-traditional heritage typical of our land.

This ancient art, now practised by a handful of enthusiasts who make our land proud, should be supported and promoted with greater enthusiasm.

Next article The tragic history of Fort VII Colomb in Poznań, the first German concentration camp in Poland.