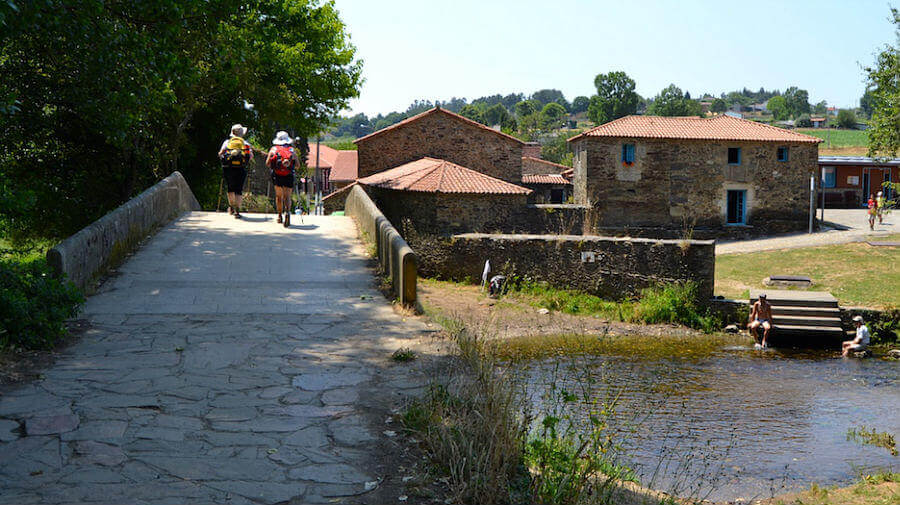 From A Castañeda to O Empalme

We continue with our adventure on the Camino de Santiago, thus beginning the fifth and next-to-last stage of the Primitive Way in Galicia before arriving in Santiago and embracing the Apostle.

We leave A Castañeda behind, in the council of Arzúa, walking over a medieval bridge that crosses the Iso river. We arrive at the village of Ribadiso, which has a dozen inhabitants. There, we can find the old Ribadiso hospital, located next to the bridge in a bucolic landscape and which today serves as a pilgrims’ hostel. Formerly, it was an old pilgrim hospital on the French Way through Galicia. The construction of this old hospital dates from the thirteenth and fourteenth century.

Following the route, we arrive at Arzúa, known as “cheese land” for its famous Arzúa cheese, which we have talked about in previous posts. In Arzúa there are famous Jacobean vestiges, such as the Church of Santiago de Arzúa, which served as a military barracks during the Spanish Civil War until 1942. The Gothic Chapel of A Magdalena is also famous, which was part of an old Augustinian convent, founded in the fifteenth century, and whose function was, among many others, to help the pilgrims of the Santiago Way. Today it is a cultural centre, a meeting point for many cultural activities that seek to bring artistic heritage closer to the population. In addition, in Arzúa we also find numerous “manor houses” and monuments, such as the monument to the “Queseras”, which represents a traditional “cheese maker” from the beginning of the last century, or the monument to the “Peregrino”, which is located on the Santiago Way, passing through the centre of the village.

We continue with our Way and pass through several villages such as A Calzada or A Rúa, where you can see a rural architecture with several Galician granaries. We go towards Ferreiros, whose church is rebuilt on the remains of an older one, and then towards Salceda. Finally, we arrived at O ​​Empalme, which, according to historians, was victim of plunder by Napoleonic troops on their advance towards Santiago. O Empalme, a village that is located in a beautiful landscape, will be our final destination of this fifth stage, where we will gather strength for the last stage of the Way.

Next article Stonehenge - The National Temple of Britain