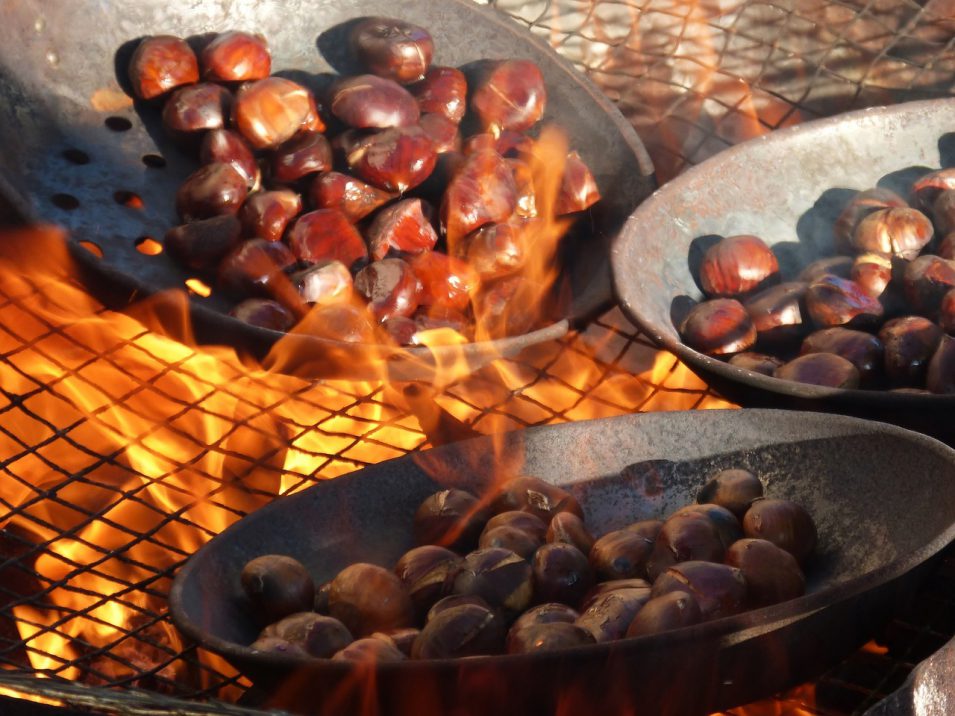 Autumn has its things; it is a time of changes and its smells are deeply kept in the memory of every Galician. One of the most characteristic throughout the Spanish geography is that of embers and chestnuts. Who has not held a cone of burning chestnuts, with the desire of a child, or with the pleasure and melancholy of an adult?

In Galicia, in addition to street stalls, the tradition goes a little further. The Galician historian and anthropologist Antonio Fraguas differentiated between the plain Magosto, which “is nothing more than roasting chestnuts over a bonfire”, and the Magosto festival, which is much more. The Magosto is a festival of harvests, fire, chestnuts and new wine. It is a celebration of getting together and having fun, a celebration of life and death, of youth and of treacherously smearing the one in front. These elements are joined together to celebrate the arrival of Autumn and, as we have already mentioned, it has a special meaning for the people that live in the region of Galicia as it is connected with its Celtic origins and its close relation with the Samahaim, the day when the Celts set their first fire.

In Galicia this celebration normally takes place between the 1st of November (All Saints Day) and the 11th of November (Saint Martin’s Day) although since the beginning of November the streets are full of chestnut roasters. And the smell of roasted chestnuts becomes the perfume that dyes the rainy autumn days until the arrival of Christmas.

The word «Magosto» means “fire set to roast the chesnuts”. And it is believed that it comes from the Latin expression Magnus Ustus – great fire –. On the day that it is celebrated people gather together and goes up the mountain to prepare bonfires to roast the chestnuts and celebrate the arrival of the autumn season. Moreover, other activities are carried out such as games for children.

The history beneath the chestnut and its festival

The «Magosto» is a traditional festival as deeply rooted in Galician popular culture as the harvests and the tree responsible for it. Chestnut trees have been an essential part of the Galician landscape for many centuries. Like so many other things, that would say around there, Galicia owes its chestnut trees to the Romans, who brought more productive tree varieties than the autochthonous ones that quickly spread throughout the region. During the following centuries, the chestnut acquired great prominence in the vital and economic cycle of the lands, both of the landowners – monasteries and nobles – and of their tenants. Taking advantage of it as much as possible (from the wood of the tree to its fruit and its waste) the planting of «soutos» (woods covered with chestnuts) was demanded and the rent of the lands where they were grown was paid with the chestnuts collected.

Its great crisis came in the 19th century, when serious tree diseases took away many «soutos» and other novel crops began to be favored, among which potatoes and corn stand out. From this time comes the current geographical “relocation” of chestnut trees, which survived –until today– preferably in the inland areas of Lugo and Orense.

The chestnut trees are, therefore, centenary trees in Galicia –in Manzaneda (Orense) you can find a specimen that is a thousand years old and almost 14 meters in circumference– and as such they have always been associated with the life cycle. The Galician writer and historian Manuel Murguía considered the Magosto as a funerary banquet in which the chestnut on fire would symbolize death and wine, the new life. Around this idea, to celebrate the end of a new harvest, neighbors, family and friends gathered. It was a party especially loved by young people: they collected and brought chestnuts and they carried carafes of wine. They ate, drank and ended up dancing and adorning their faces with ash.

Today the celebration of this festival continues to be popular in the region of Galicia. However, it is most widely celebrated in the interior of the region in the provinces of Lugo and Ourense. This last one, has Saint Martin as its official patron. The most popular celebration of all is the one that takes place in «Montealegre» (Ourense). As our teacher of German language, native from German but with roots from Ourense, she remembers going to this mountain with her family and, specially, with her friends to celebrate the Magosto. And, as in any party worth its salt, the music could not be absent. So, traditional Songs incorporate the vocabulary connected with this festivity… but, never forgetting the Galician «retranca».

Many traditional stories tell that the chestnut tree has the same magical and beneficial power the oak has. Although for ancient Galician people the shade of the chestnut tree is a symbol of bad luck. It was believed that, once the chestnut tree is cut the devil comes from inside it to take off the live of the one that did it. The only way to get rid of this death is by offering the devil the life of a son or daughter.

In fact, the fruit of the chestnut tree – the chestnut «castaña» – has been considered for centuries a funerary fruit as it was traditionally eaten or left for the death the day before All Saints. This belief is similar to that of the Venetian tradition, as in this Italian region chestnuts are eaten the day of Saint Martin. (11th November). Some stories even tell how poor women sang songs of praise and good wishes under the windows of the rich in exchange of chestnuts.  These women were representing the souls of those that were no longer alive.

Another legend connected with the ancient tradition is that, apparently, stepping on a chestnut while walking through the mountain means that that person would never fall in love due to the heart shape the chestnut has.

Also… dreaming with chestnuts has a hidden meaning and it would vary depending on how the chestnuts are: if they are raw, it means that the person that has dreamt with them needs to do something urgently; whilst if they are boiled, it means the person has a weak character and, if roasted, it is a warning to be careful.

“Early is the chestnut that scolds for September”

“Trust the roasted chestnuts, which explode, they will come out in your face”

“With roasted chestnuts and salted sardines there is no bad wine”

Next article MINORITIES IN GREATER POLAND