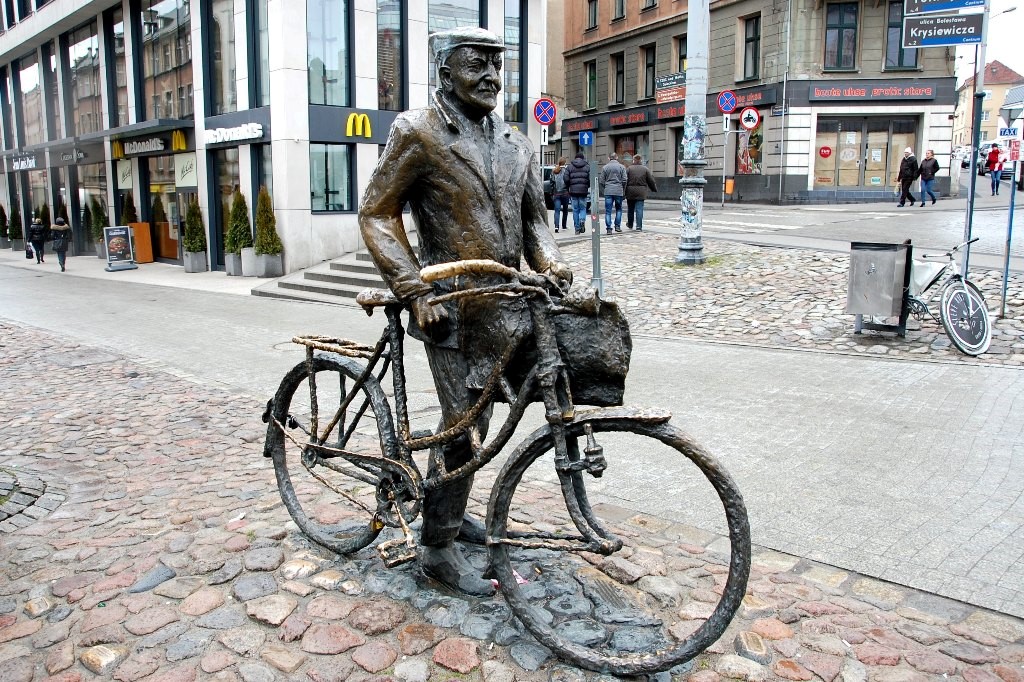 When we talk about famous symbols of Poznań, it is important to mention Old Marych, one of Poznań’s most beloved citizens.

The bronze statue of a man with a bicycle that you may find yourself colliding with is that of Stary Marych (Old Marych), one of Poznań’s most beloved citizens. A fictional character who came to symbolise the typical Poznanian, the grumpy but decent Stary Marych was the creation of Juliusz Kubel, and featured heavily on Polish radio, all the time speaking in his particular and highly amusing Poznań dialect. Sculpted by Robert Sobociński, the photogenic codger has stood since 2001.

The character first appeared in 1983, in a radio program “Blubry Starego Marycha”, which, as the title suggests (“blubry” is not a commonly used word, and it can be translated as nonsense, gibberish), is a symbol of said dialect. Using this dialect, already deceased Marian Pogasz, playing the aforementioned Marych, talked about people, our day-to-day lives, our ups and downs, benefits and drawbacks, vices and nonsense, what surrounds us, what we are saturated with (although we are not always aware of it).

Thanks to the popularity of this fictional character, in 2001 on Półwiejska Street, a bronze statue of a man riding a bicycle has appeared. His buckle has been rolled up and clipped on one of the legs to keep it completely safe while riding, and he’s holding a briefcase in his hand. This monument, created by Robert Sobociński, is probably the only physical representation of the dialect in Poland, and a subject of great affection. Many people also believe that touching its steering wheel brings good luck, so if you find yourself in the vicinity, it’s a good idea to visit this old codger.

If you are interested in our local dialect, here you can listen to the broadcast “Blubry Starego Marycha”:

Next article The Calabrian fathers of the Gregorian calendar